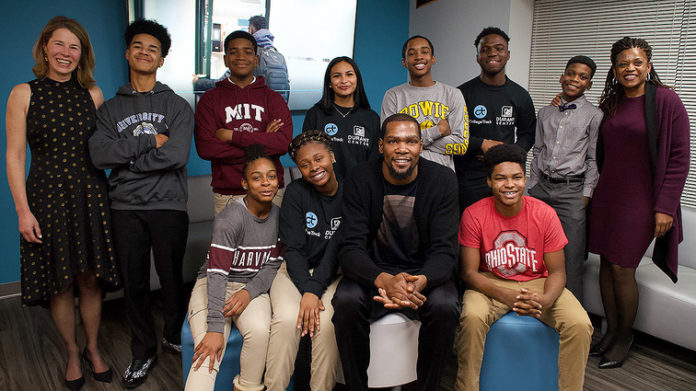 NBA superstar Kevin Durant has made a big impact on the youth of his hometown of Prince Georges County, MD by opening an afterschool center.

The facility named, “The Durant Center,” was established by Durant with the aim of helping low-income and underserved students enroll and graduate from college.

Through a partnership with College Track, an organization that guides students from their teen years through college graduation through a 10 year plan, the center has already started making a difference. The facility, which is first from the organization on the east coast, so far has a class of 69 students, all of which will receive resources to aid them on paths to and through college. The aid includes financial, academic and social-emotional resources that will be provided to the students as well as college aid and career development.

Prior to the partnership with College Track that lead to the creation of the Durant Center, Durant has continuously given back including by donating nearly $60,000 for new basketball courts at the recreation center where he learned to play basketball and by previously pledging 10 million dollars to College Track for the first 10 years of the organization’s existence.

The Durant Center now stands as another testament to KD’s dedication to the betterment of his community.The Golden State Warrior said this when speaking about the creation of the center, [It’s] “The full circle stuff that you dream about; Hopefully, that inspires kids in the area.”