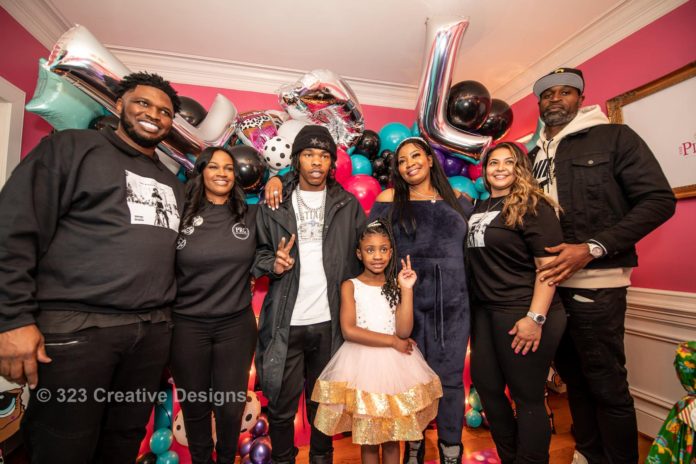 The death of George Floyd shocked the world and left many of us in absolute disbelief. But no one has felt this deep loss more than Floyd’s family, in particular his six-year-old daughter Gianna Floyd. Gianna lost not only her father and support system but also her best friend. Thankfully Gianna and her mom have people who love and support them on their side and the Atlanta support is strong. Restaurant Ten owners, Ericka and William Platt have built a close bong with Gianna through their close friend, Stephen Jackson. Amongst the three of them, they have been able to be a solid system for Gianna and her first birthday without her father was something they took seriously.

William Platt reached out to his rolodex of famous friends for Gianna’s big day. Like many others, Atlanta’s own Lil Baby took that moment to let his voice be heard. Inspired to create the record “The Bigger Picture”, Lil Baby decided to take it a step further and be of service to Gianna by sponsoring Gianna’s birthday.

Over the last few months, the Platt’s have stepped in as a support system to Gianna and her mother, Roxie Washington. “This is a very difficult time for my daughter so we’re very grateful that our extended family is creating such a special experience for Gianna on her first birthday without her father,” said Washington.

Ericka Platt who’s daughter also lost her father due to an act of violence was inspired to support other who have experienced similar loss. “My kid’s father died when she was only two years old, and so I was left to provide for the holidays and birthdays.  I was able to get support from numerous people throughout Atlanta during that tough difficult time for me,” Erika tells JaGurl TV, “and that was a part of the healing process. I was supported  during my time of need; and I want to give back to the community and provide the same type of support”, said Ericka Platt. Platt did just that with the help of Stephen Jackson who organized and created “Love to All Who Have Love For All” in which they plan to continue supporting children who have experienced the loss of a parent to violence. They plan to continue celebrating birthdays and holidays for those families. Learn more about the movement and how you can donate here.

The birthday party included surprise guests including Future’s daughter Londyn Wilburn, Shaq O’Neal, and many of Gianna’s close friends. The party was held at The Pink Hotel with the ‘Let’s Get All Dolled Up’ LOL Doll theme. Check out more photos from the party below.