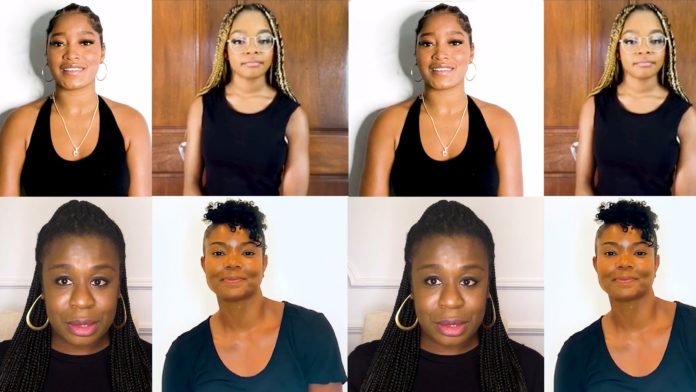 This week, Glamour released a PSA, titled I’ve Been Told, in which 13 black women share their various experiences with hair discrimination.

Their stories, which were voiced by Black celebrity women, explains the everyday stigmas Black women face based solely on the texture of their hair.

During the video, the actresses urge viewers to sign and support the CROWN Act, which is state-level legislation to end hair discrimination.

The video starts with each star stating various comments that Black women receive regarding their hair.

The video continues going indepth to the personal expereinces Black women have faced regarding their kinks and coils.

“I’ve had strangers walk up and pet me,” Martins reads one women’s story. “I’ve been mocked and ridiculed for the frizzy coils that escaped my tightly wound bun.”

Palmer voices a instance in which a women was told by HR that her hair pulled back was “more professional” than curly.

Martin expresses how this form of humiliation isn’t only effecting adults but children as well.

“I’ve seen children humiliated at school, getting suspended. The baby girl whose teacher cut her hair because her beads were making too much noise,” reads Martin. “Those actions are bullying, discrimination, microaggressions, and acts of racial injustice.”

Regardless of the stigma surrounding Black women and their natural hair. Each woman expresses how their hair still makes them feel empowered and beautiful.

“I wear my hair boldly and proudly as it is the crown that makes me unique,” adds Aduba.

“Fun fact:” chimes Palmer, “Whether my hair is in a fro, braids, twists, locs, or high puff, I am still a doctor.”

Glamour’s PSA will accompany their September Hair Issue, the cover features six women who have worked in various professions but all have experienced hair discrimination.

“The relationship between Black women and their hair is unique, powerful and extraordinary” Edwards says. “Yet for too long Black hair has been the subject of unwarranted scrutiny and controversy. I’m so glad Glamour recognized the importance of the issue and lent me their platform to create this package to amplify the message that our hair is beautiful, complex, professional and not up for debate.”