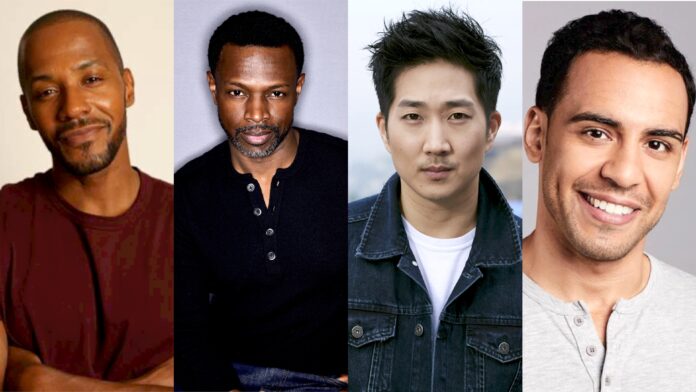 The Onyx Collective powered by Walt Disney Television releases projects by people of color and underrepresented creators telling the stories of those groups. Other works from the brand include OWN‘s docuseries Hair Tales and the Summer of Soul documentary directed by Questlove. Reasonable Doubt is one of many projects to come from the collective. Actress and director Kerry Washington is named as one of the executive producers of the series.

Reasonable Doubt follows Emayatzy Corineadi‘s character Jax through her life of being a mother, wife, and high-profile Los Angeles defense attorney. She takes on billionaire Brayden Miller’s interesting case while dealing with separation from her husband Lewis and an old client’s release from prison. With five episodes airing, critics and fans praise the creator Raamla Mohamed and compare the series to screenwriter and director Shonda Rhimes. Although Mohamed is a former Scandal writer, she brings in different perspectives, storylines, and themes that can hit closer to home.

Our Kind Of People star McKinley Freeman portrayed the leading lady’s husband, Lewis Stewart. At the premiere, JaGurlTV questioned the Hit The Floor actor on how he prepared for his character and what viewers takeaway from the series when discussing social injustices. He comments, “What good content does is shed a light on some of the discrepancies and indifferences and some of the things that plague our community and I think that’s what this opportunity is. You have Brayden (a billionaire) and you have Damon (a brother who just got out of jail) and no matter what you think of their situations as it relates to the balance of how society perceives them and values them ultimately they’re still the same.” In regards to his character, Freeman took a humanistic approach. “The things that connect everyone that breathes and then specifically in a body that I’m asked to take a specific perspective on in this world of Reasonable Doubt. I think a lot of it is just being present as an artist and being flexible in knowledge to be able to move with whatever comes.”

Sean Patrick Thomas appeared in classics like Save The Last Dance and the Barbershop series and most recently featured in Till. In Reasonable Doubt, he plays Brayden Miller, a billionaire businessman who became a prime suspect for murdering an employee who had previously accused him of sexual assault. When asked how he prepared for his character, Thomas complimented the writing and nodded at his own his experience. “Honestly the script is so brilliant and so well done. All I really had to do was commit to what was already written on the page. I feel like preparing for this role was honestly the culmination of my life up until this point. I know what it is to fight. I know what it is to be competitive. I know what it is to have a family. I know what it is to try and hold on to what you have.” During the discussion, he describes his feelings toward his character portrayal. “You can’t buy your way out of being black. That’s something that I’m really glad to have a chance to be a part of, telling that story. It’s about how certain barriers to being equal and being treated with respect that no amount of money can get you out of and Brayden’s a perfect example of that. I’m glad to be apart of illuminating that circumstance.”

As an Asian man, Tim Jo expressed that it’s not “abnormal” for him to receive roles that serve as comedic relief siting that some roles are written in unsafe spaces. When presented with the role of Daniel Kim, the This Is Us actor couldn’t let the opportunity pass. “I took the role because it was coming from Onyx and I had read what Onyx was building itself on. I had to get out of my own way and say ‘What does this character serve in this story?’. In the show Daniel serves as Jax’s investigator in the Brayden Miller case. Although his character serves the jokes, he goes to great lengths to obtain information for his friend Jax. Jo discusses his relationship with Jax and accepting this particular role over others that may be alike. “You’re looking at the full life of a woman, you’re seeing the spicy side, you’re seeing the sexy side, and then what I’m there to do is to show a little bit of her sweet side. So my humor plays a very integral role in her life and as soon as I was able to accept that I was like ‘I can get beat up, I can tell bad jokes, I can wear fly cardigans’ because I trust Raamla, I trust Onyx, I trust the story and I believe the quality of what we’re doing is excellent and its important’.”

Victor Rasuk stars as an old classmate of Jax and a determined district attorney Mike Ortiz. Rasuk has previously starred in the Fifty Shades series and as Danial Garcia in the ABC television series The Baker and the Beauty. Rasuk dove into his thoughts on being latinx playing as an attorney. “What was cool about this role is that I didn’t get to play these kind of roles as well. I was super excited about that. I was like I get represent this [defense attorney] on such a high level, I’m Latin. I know that they exist, but it’s like on this kind of platform. I was super honored.” He researched and prepared by immersing into a real trial. “I remember going to the DA’s office in Los Angeles. He allowed me to sit through a murder trial and I just saw how the process is. I remember being so exhausted emotionally as a viewer and I was like ‘Wow I’m taking on a Herculian task by doing this’ but I knew the role was bigger than me.”

Ryan Richmond wrote episodes three, the finale of the series, and featured in episode five as a friend of Damon’s. The cinematographer, writer, and producer spoke with JaGurlTV on being on a writing team dedicated to bringing the creator’s vision to life. “It was interesting because it’s a team. You’re really falling into the vision of the creator and trying to give her what she wants and embellish on the vision she’s already started. This is the type of content I like to do. Very real, very authentic, very subtle in many ways and true to the people that we know well and the culture that we know well and that part of things was absolutely amazing and that part of it was easy because I’m familiar with it.”

With the first season coming with twists and turns every episode, Kenny Burns asks producer Roger Bobb if there will be a season two. “It’s a streaming service. It’s not a situation where you could just look at the ratings. They have to know that our people are watching the show. It doesn’t even have to be a high number, it has to be a passionate number.” He ends by urging viewers to take to social media to not only talk about their love for the show but voice the need and want for a second season.

Reasonable Doubt is now streaming on Hulu with new episodes releasing every Tuesday!