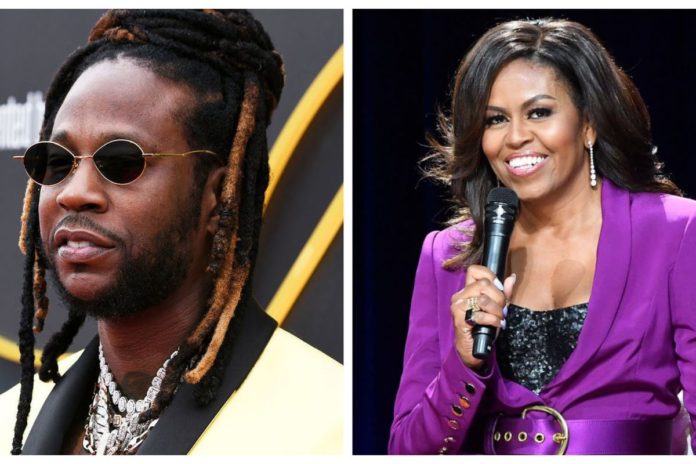 Atlanta Rapper 2 Chainz partners with Michelle Obama‘s When We All Vote to help educate individuals who were formerly incarcerated on their voting rights.

When We All Vote is a non-profit organization, launched in 2018 by Michelle Obama, Tom Hanks, Lin-Manuel Miranda, Janelle Monae, Chris Paul, Faith Hill, and Tim McGraw, to “close the race and voting gap by changing the culture around voting.”

Sunday, the organization released a video in which the grammy-winning artist 2 Chainz expresses his personal connection to the cause.

“As you know, or may not know, me as well as many peers my age and where I’m from have been either incarcerated maybe once or twice in their lifetime,” says 2 Chains. “And for those of you that have been through those unfortunate circumstances, I would like to notify you about some of the things and give you some real clarity about voting and your rights.”

The Atlanta native dispels the common misconception that your right to vote is dismantled after incarceration. He goes further to give examples of states and laws helping former inmates learn their voting rights.

“If you live in Maine, Vermont, or [Washington] D.C., you never actually lose your rights to vote, even while being incarcerated,” he states. “And in at least 20 states or something like that, you’re allowed to vote after you pay your fines, your restitution, get off parole or probation. So it really depends on where you live.”

As the election approaches, celebrities throughout all fields of entertainment are using their voices and platforms to encourage voters. For the rapper, “this election matters more than any other election in our lifetime.”

2 Chainz specifically spoke to those who believe their votes don’t matter.

“I feel like spreading this small message can hopefully reach somebody out there that [doesn’t] think they have the chance to and the opportunity, to take this opportunity to vote,” he says in the closing clip.

This is not the first time 2 Chainz has used his platform to help educated former inmates.

In 2012 the rapper wrote an op-ed for the Rolling Stones calling to the moment he learned he still had the right to vote as “life-changing.”

“When I learned in 2008 that I had the right to vote in the state of Georgia, it changed my perspective on the democratic system. I had incorrectly, for all of my adult life until 2008, believed the biggest voting myth that exists – that ex-felons cannot vote.”

If you are or someone you know has been formerly incarcerated and are interested in voting in the upcoming election, click here to see if you are eligible in your state to vote.