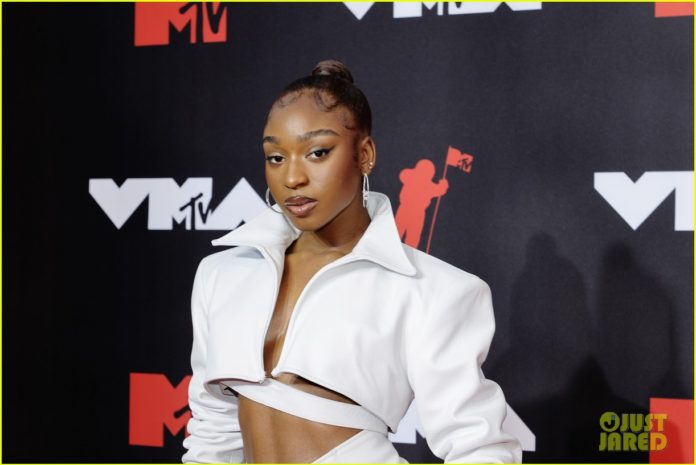 Sunday (Sept. 13th), Normani performed her recent hit “Wild Side” at the 2021 MTV’s Video Music Awards (VMA’s), the singer took the opportunity to recreate signature looks and choreography from some of music’s biggest icons.

As the former Fifth Harmony member took the stage, fans began to note the similarities in her performance and previous female R&B legends. According to ETonline, “Wild Side” samples Aaliyah’s hit “One in Million.” The “Motivation” singer and her backup also performed a similar choreography to what the R&B princess’s displayed in the music video accompanying the hit single. Fans pointed out that Normani’s ensemble channeled a similar aesthetic to what the ladies from the 90’s girl group TLC wore in the music video for their chart-topping single “No Scrub.”

Just when the audience thought the jail-dropping performance was coming to an end, Teyana Taylor came out strapped to a bondage board. The crowd went into a frenzy. The R&B bombshell mounted herself onto the board and began to straddle Taylor. Fans quickly pointed out the origins of the signature lap dance. The scene was inspired by Janet Jackson’s trademark lap dance she would give fans when performing “Would You Mind” live.

The streamy exchange came to a climax, as Normani locked her heels to the base of the bondage board and dipped back to include the audience into their exchange.

Normani’s VMA performance successfully channeled some of music’s largest black stars, once again reflecting black culture in her pop career. After the release of her 2019 hit “Motivation,” which also successfully paid tribute to iconic black women performers, Normani sat down with Cosmopolitan. During the interview, the singer declares that all of her music depict black women and black culture

“I’m gonna make whatever I do Black,” she tells the outlet. “You’ll know that I’m a Black girl, even if it’s on the quote-unquote whitest record ever.”

For the singer, it’s more than just creating hits, it’s about continuing the legacy of successful Black women artists who inspired her.

“Those women before me, I wanna finish what they started,” she said.