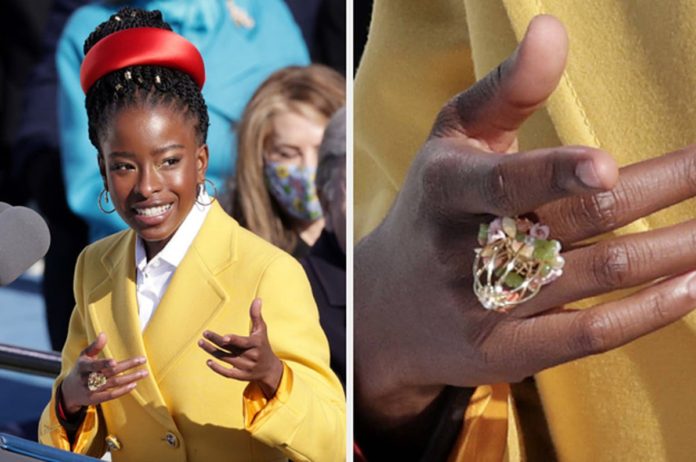 CBS Reporter and long-time friend of Oprah Gayle King revealed the touching piece of jewelry during the CBS coverage of the event.

“Maya [Angelou] did Bill Clinton’s address. She[Winfrey] reached out to Amanda to say… because she [Winfrey] bought Maya her coat that she wore that day,” King explained. “She said, ‘I’d like to get a coat for you to carry on that tradition.'”

“[Gorman] said, ‘I’ve already picked out my coat. It’s yellow. It’s my favorite color.'” Instead of a coat, Winfrey gave Gorman earrings and “a ring that’s shaped like a caged bird.” The stunning piece is a tribute to Angelou’s iconic poem, “I Know Why the Caged Bird Sings.”

“Now they are bonded for life,” King concludes. “Tradition continues for Oprah and Maya.”

Oprah took to Instagram to congratulate the 22-year-old, who is the youngest inaugural poet.

“I have never been prouder to see another young woman rise!” she writes. “Brava Brava, @amandascgorman! Maya Angelou is cheering—and so am I.”

Shortly after reciting her poem, “The Hill We Climb,” Gorman took to Twitter to thank the women who paved the path for her.