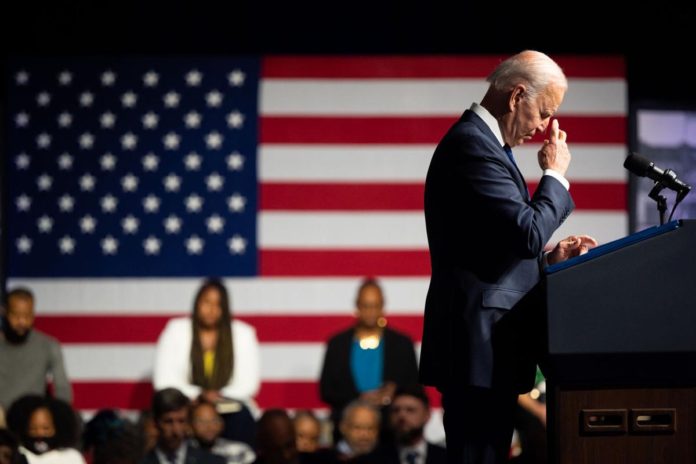 Black Wall Street refers to the city’s 35-block Greenwood neighborhood, a booming business district for Black entrepreneurs and businesses. Between May 31st and June 1st, 1921, a White violent mob terrorized the neighborhood, killing as many as 300 Black residents and destroying the area.

According to People, the tragedy is documented as one of the deadliest incidents of racial violence in American History. However, it remained unreported for decades.

“For much too long, the history of what took place here was told in silence, cloaked in darkness,” Biden said Tuesday. “But just became history is silent, it does not mean it did not take place. While darkness can hide much, it erases nothing.”

University of Michigan historian Scott Ellsworth, the author of two books about the 1921 Tulsa Race Massacre, refers to Biden’s speech as “deeply moving” and “extremely significant.”

“For 50 years, the massacre was actively covered up,” Ellsworth explains in a Faculty Q & A. “Official records were stolen and destroyed, articles were scissored out of newspapers. Tulsa daily newspapers went out of their way to not talks about it for half a century. Even as late as the 1970s, researchers were threatened with their lives and their livelihoods for trying to do this.”

For Ellsworth, Biden’s speech resonated most with him when the president referred to acknowledging the past.

During his speech, Biden proclaimed, “My fellow Americans, this was not a riot. This was a massacre.” This declaration earned lengthy applause from the crowd.

“We can’t just choose to learn what we want to know and not what we should know,” Biden said. “We should know the good, the bad, everything. That’s what great nations do. They come to terms with their dark sides. And we’re a great nation. The only way to build a common ground is to truly repair and to rebuild.”

“I though that is exactly what we have to do as a country,” adds Ellsworth.

While listening to the president’s speech, Ellsworth too thought about the survivors.

“I thought about the three known living survivors, but I also thought about other members of the community and the idea that the President of the United States, the leader of the free world, was coming to visit them to commemorate this tragic event.”

“I also thought of the survivors that are gone and how much this would have pleased them very much. They had all suffered, their families had suffered during the massacre, but they were also deeply patriotic citizens. I think that really would have meant the world to them.”

In his speech, Biden detailed plans to help close the racial wealth gap. He proposed the federal government increase funding for small businesses in many minority communities. He also pledged that his administration would include fair housing laws to stop racial discrimination.

“We must find the courage to change the things we know we can change,” he concluded.

Since taking office, Biden has used his platform to speak on social issues and tragedies. Biden uses his own experiences with grief and loss, following the deaths of his first wife Neilia and their daughter Naomi, and most recently his son Beau, to aid the country in its recovery.

“We simply can’t bury the pain and trauma forever,” he said after telling the crowd that “only in remembrance do wounds heal.”

“We just have to choose to remember,” he said.