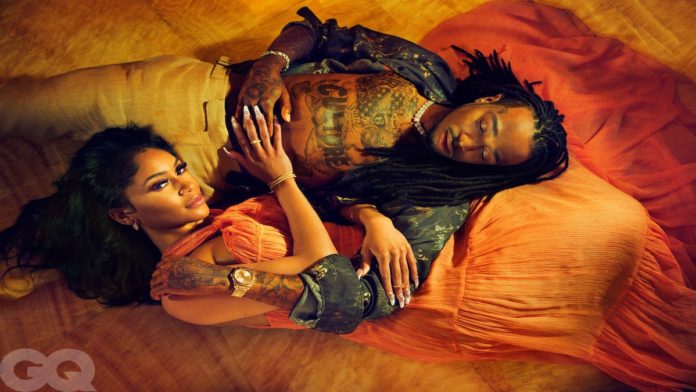 Quavo and Saweetie seem like the ‘IT’ couple in the hip hop world right now. The ICY Queen and Migo’s head Huncho are steaming up to be hip hop royalty and we are here for it!

“He’s always been fine to me,” she says, blushing. “In a group chat [with friends], I would screenshot his picture and be like, ‘Damn, this nigga is fine.’ ” said Saweetie to GQ.

The couple took to GQ magazine to share their love story and how music plays a role in it. Like many other relationships, it started with a DM and grew on from there.

Quavo admits that he is normally a private person. Although his music and lifestyle may be in the spotlight, he likes to keep his personal life private. Since the start of their relationship Quavo has shown Saweetie his personal side and there’s so much more to him than just the man on all these hits songs.

We’ve seen the couple be all giddy with each other no matter where they are. It seems like they truly enjoy each others company. They admit to learning each other’s love language (she needs words of affirmation; he, acts of service) and how important that was for their relationship. Like any relationship, they have conflicts but they try to navigate it as best they can. When things hit the fan, they go to Saweetie grandmother for advice and they let music be a big part of their love. Saweetie enjoys getting tips for her hitmaker boo and he loves to try an impress her with a new track.

The couple has been together for almost 2 years now, and can both agree that this relationship has changed them for the better.

“Growing up I struggled with communication, and he has taught me to be a better communicator,” she said. “I feel like I’m growing and I’m maturing because of him—not the music, not Saweetie, but Diamonté.… I don’t know how I would be as a person if I would have never met him.”

Quavo seems to match her earnestness, and admits that she has helped him learn how to love a woman. The pair were tight lipped about their plans for the future but we are sure it includes some dope music and hopefully some more photo shoots. This couple is relationship goals for sure!