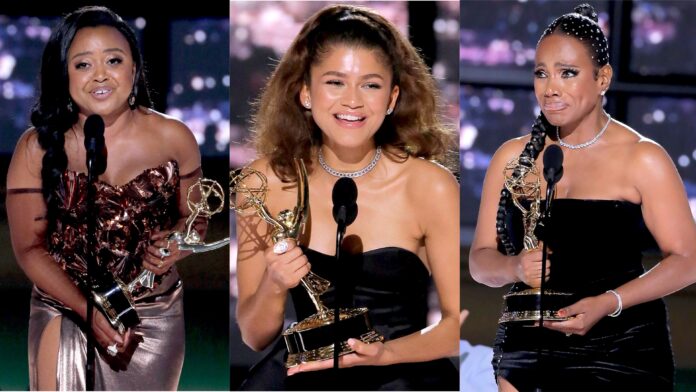 The 74th annual Emmy Awards aired Monday night on NBC. Hosted by SNL’s Kenan Thompson at the Microsoft Theater in Los Angeles, nominees sat in anticipation as their categories were called. It was a great night for Black creators in the television industry where a few of our favorite stars won BIG, some for the first time! Here are our top 5 wins from last night’s Emmy Awards.

The creator, writer, and lead of Abbot Elementary won her first Emmy! Quinta Brunson went from Buzzfeed to the Emmy stage winning the Oustanding Writing for Comedy Series. She is the first Black woman and the third Black writer to win. At 32, Brunson was the youngest Black woman to ever be nominated in that category.

Being the youngest star to win her first Emmy award, Zendaya continues to show what hard work will get you. The Euphoria actress took home her 2nd Emmy for Best Lead Actress for Drama Series. At 26 years old, Zendaya made history being the youngest actress to win two times!

With an outstanding career run still in full effect, Sheryl Lee Ralph finally won her very first Emmy for her stellar performance in Abbot Elementary. This makes her the second Black woman to win Best Supporting Actress for Comedy Series after Jackée Harry won in 1987 for 227. She gave an inspiring acceptance speech singing Diana Reeve’s “Endangered Species” when taking the stage.

The “About Damn Time” artist is two awards away from being an EGOT winner after taking home the Outstanding Competition Program Emmy for her Amazon show Lizzo‘s Watch Out for the Big Grrrls. Her show follows her search for plus-size backup dancers. She accepted her award and dedicated it to the “big grrrls!”

Producer, director, and writer Jerrod Carmichael won his first Emmy last night for his HBO Comedy special Rothaniel. While sporting Puff Daddy’s fur coat, Carmichael took to the stage accepting the award for Outstanding Writing for a Variety Special. He executive produced and starred in the special where he unearthed a very personal topic.