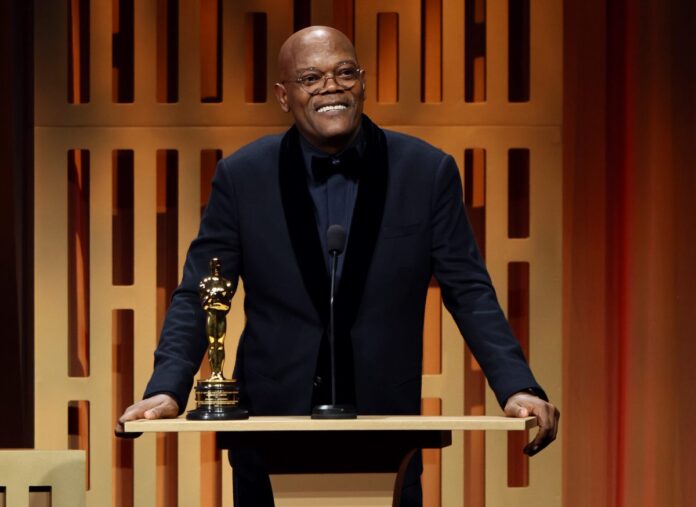 Samuel Leroy Jackson is a world-renowned American actor and producer. “I never did one thing right in my life. You know that. That takes skill.” – Jackson as Mitch Hennessey in The Long Kiss Goodnight. Originally Jackson majored in Marine Biology and Architecture at Morehouse College before deciding to take on drama after attending a public speaking class and performing in a version of The Threepenny Opera. The rest is history as he has recently been awarded an Honorary Governors Award from the Academy of Motion Picture Arts and Sciences (AMPAS).

Jackson was presented the honorary Oscar statuette award by fellow thespian and long-time friend Denzel Washington commemorating and recognizing his film career. “I’m really, really proud to receive this statue,” Jackson humbly declares as he accepts his recognized prestige. Through his acceptance speech, he shares his sentiments for sticking true to one’s passions and being a beacon of hope for others in their journey. “When I got the opportunity, I tried to represent this business the best I do now. I got out there to entertain audiences the way Hollywood entertained me. Make them forget their lives for a few hours and be thrilled, awed, or excited at the big room where make-believe lives.”

He concludes his acceptance with gratitude to his much adored and appreciated fans. “Thanks to every person who has ever bought a ticket to any movie I was in.”

The Honorary Governors Award is a prestigious achievement designated by the board of governors of AMPAS. This recognition is in celebration of motion picture achievements not covered under a particular year’s academy awards categories. Honorary awards are given for lifetime achievements, exceptional contributions to motion picture arts and sciences, and outstanding service to the academy. This marking is of prime cause as Jackson continues to be the highest-grossing actor of all time, netting over $27 billion worldwide. In addition, he is the most widely recognized actor of his generation.