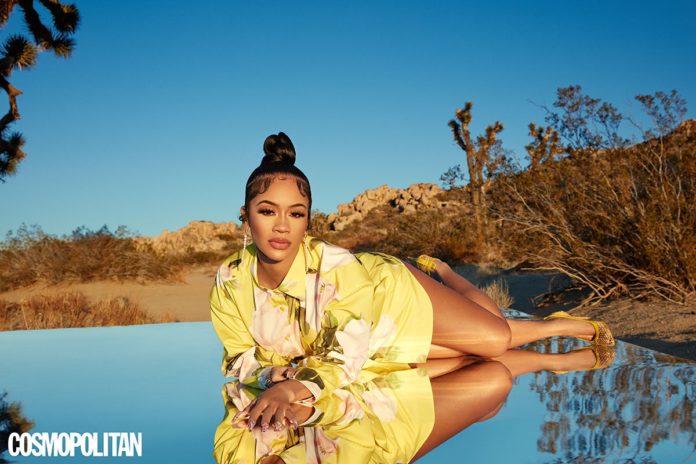 In her new Cosmopolitan April cover story, Saweetie opens up about her growth from early-career mistakes that gave her PTSD.

“Last year was the year that I finally became comfortable in my own skin,” Saweetie tells Cosmo. “I think it’s important to show little Black and Brown girls that they can be successful in whatever they want to do. If I can do it, you can do it too.”

The Cosmopolitan story follows the rise of the California rapper from viral internet sensation to becoming a Grammy-nominated artist. Although her lyrics and style oozes with self-confidence, the self-proclaimed ‘Content Queen’ recalls early career setbacks that made her a stronger artist.

The “My Type” rapper refers to the infamous HOT97 interview in February 2018, where a radio host referred to her freestyle as “basic.” The host went further to suggest that aside from her beauty, the young rapper had nothing else to offer. This moment sparked what Saweetie refers to as “a really dark point” in her life.

“I went from being so loved so quickly because of ‘Icy Girl’ to, on my first promo run, well, you saw the interview. The script flipped really quick, like night and day,” the rapper explains. “I was like, Wait…I had PTSD from that.”

Following the host’s critics, the internet went into a frenzy. Videos of the rapper’s previous performance resurfaced and were scrutinized.

“Because ‘Icy Girl’ was so popular, I was being booked at huge festivals,” she explains. “I was literally thrown into it.”

This isn’t the first time the has been underestimated because of her beauty.

“It’s my way of taking back all those years where I feel I had to dim my light,” she adds.

Saweetie has turned her darkest moments and setbacks into the fuel that drives her forward.

“I’m really grateful for my start,” she tells the outlet. “Because the mistakes, the struggle, the grind-it allows me to appreciate the rewards that come now because I know what it feels like to sleep in motels, to drive and do promo, to be stressed out.”

“Money beats court cases, money buys medicine,” she says. “Money fixes potholes, money puts food on the counter, and money keeps the heat and electricity going. So if I can spread the wealth, that’s what I want to do.”