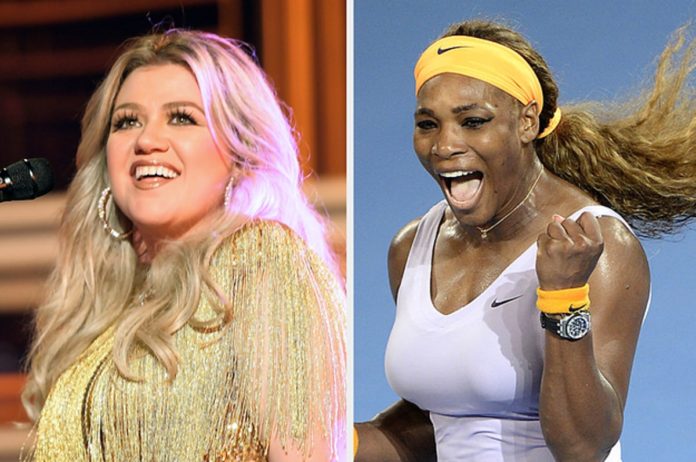 During her appearance on The Kelly Clarkson Show, host Kelly Clarkson and tennis superstar Serena Williams discuss the importance of body positivity.

Both stars candidly admit that their bodies have been scrutinized by the public eye.

“One thing I love about you is, I’ve always had to be, like, stand strong for myself with my body images,” Clarkson tells Williams. “And I love that you’ve always done that. You are so body positive.”

“I love that you’ve always done that,” Williams responds. “One time you went off on somebody. I was like, ‘Oh,’ I loved you for it!”

“Was it the British chick?” Clarkson asks, recalling an incident in 2015 when UK reporter Katie Hopkins criticized Clarkson’s weight in several tweets. At the time, the singer responded by telling Heat Magazine, “I’m awesome! It doesn’t bother me. It’s a free world. Say what you will.”

Now, the singer recalls her reaction.

“I was like, ‘Look, I aint got time for you over the pond,” Clarkson tells Williams. “I got enough people hating on me over here!”

The GRAMMY award-winning singer explains to Williams what inspires her to stand up against body shaming.

“What makes me mad about it, it’s honestly not how it’s said to me — it’s rude and obviously, nobody likes to hear it — but it’s because other women and other little girls are looking out there and they’re bigger than me and they’re going, ‘If they think she’s this way, then what does the world think of me?’” Clarkson says. “The domino effect of that is so detrimental for people’s psyche and especially nowadays with young women on social media … it’s just so hard.”

This is not the first time Williams has addressed body shammers. In a 2018 interview with Harper Bazaar UK, Williams opened up about her body constantly being shammed and criticized in the public eye.

“It was hard for me. People would say I was born a guy, all because of my arms, or because I’m strong. I was different to Venus: she was thin and tall and beautiful,” Williams tells Harper Bazaar. “and I am strong and muscular — and beautiful. But, you know, it was just totally different.”

Although a constant battle, Williams explains that she will never let someone else’s opinion depict the way she views herself.

“I’ll never be a size 4! Why would I want to do that, and be that? This is me, and this is my weapon and machine,” she explains. “I can show Olympia [her daughter] that I struggled, but now I’m happy with who I am and what I am and what I look like. Olympia was born and she had my arms, and instead of being sad and fearful about what people would say about her, I was just so happy.”