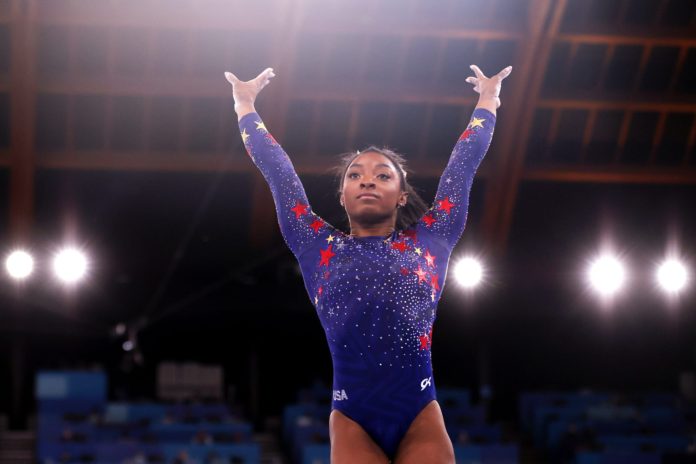 Tuesday night in Japan, Biles briefly left the competition floor following her vault. After the final ended, Biles told reporters that she was “okay, just dealing with some things internally which will get fixed out in the next couple of days.”

She says that she has plans of returning to the floor for the Thursday all-around final.

According to PEOPLE, the USA gymnastics said in a statement sent out during the event that “Simone has withdrawn from the team final competition due to a medical issue. She will be assessed daily to determine medical clearance for future competitions.”

The five-time medalist left the floor with the team’s trainer Marcia Faustin following her vault routine. While performing her Amanar Vault, Biles managed only one-and-a-half rotations and landed awkwardly. The mishap caused gasps to trickle throughout the audience.

Biles’ score was 13.766; this is the lowest score the athlete has received in her entire Olympic career.

Shortly after leaving the floor, the Olympian returned to the floor. Biles hugged her teammates but remained on the sidelines as the rest of the U.S. team competed.

Jordan Chiles replaced Biles for the remainder of the event.

On Monday, a day before the women’s team event, Biles took to social media to reflect on her performance at Sunday’s preliminary competition. The 24-year-old spoke about the pressures of perfection and how sometimes it can be overwhelming.

“It wasn’t an easy day or my best, but I got through it,” Biles wrote on Instagram. “I truly do feel like I have the weight of the world on my shoulders at times. I know I brush it off and make it seem like pressure doesn’t affect me, but damn sometimes it’s hard hahaha! The Olympics no joke!”

Simone Biles is regarded as one of the most talented women’s gymnasts of all time.