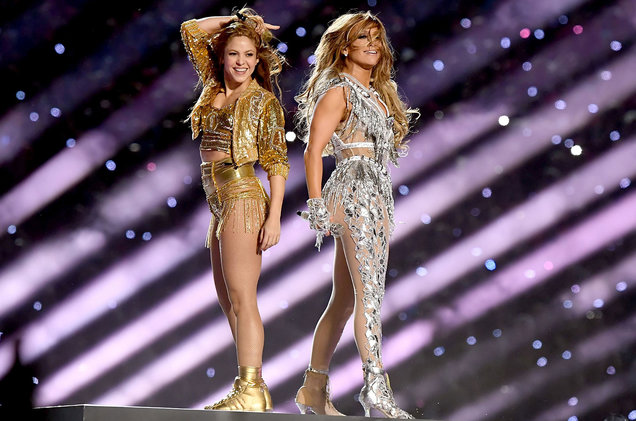 Super Bowl Sunday was last night and Miami Florida was bustling with excitement. As we watched the 49ers and the Chiefs give it their all on the field, we anticipated for Jennifer Lopez and Shakira to give their all on the stage during the Pepsi Halftime show. The ladies marked the first time in Super Bowl history that two Latina artists took the halftime stage together. A duo like this created feminine energy and sociopolitcal symbolism.

Shakira opened for Jennifer Lopez performing her hits like “She Wolf” and “Empire.” The bilingual singer had the Hard Rock Stadium rocking when she began to crowd surf for “Hips Don’t Lie”. She also dueted with Bad Bunny on “I Like It Like That”.

Jennifer Lopez then came out to perform her Cirque de Soleil like tricks on a neon pole while starting off with the hit “Jenny From the Block” and “Waiting for Tonight”. Marc Anthony went to Twitter to congratulate their 11-year-old daughter Emme, and many other children as they performed “Symbols of an American Dream”.

The ladies joined forces while performing “Let’s Get Loud” and “Waka Waka”. There was bilingual singing, dancing and a lot of action. The ladies represented their Latin pride and broke records while putting on an amazing show. This was the first Super Bowl halftime show co-produced in partnership with Jay-Z’s Roc Nation.

The full setlist was:

“Jenny From the Block”

“Born in the USA” with Emme Maribel Muñiz