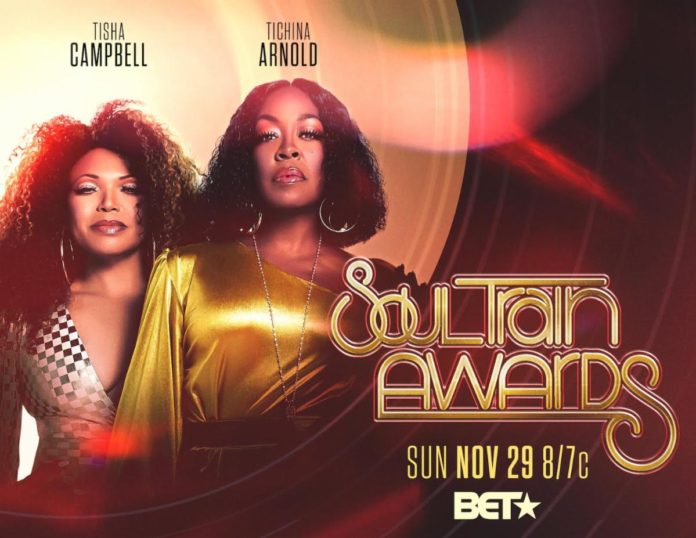 The 90’s iconic best friend duo, both on-screen in the sitcom ‘Martin’ and in reality, Tisha Campbell and Tichina Arnold will return for their third year as hosts for BET’S 2020 Soul Train Awards.

The annual award ceremony honors established musical superstars, as well as promising upcoming artists on their way to stardom, in various categories from the music genres of Soul, R&B, and Hip Hop.

This year, H.E.R leads with the most nominees for this year’s award show, receiving eight nominations including ‘Best R&B Female Artist.’ Chris Brown closely follows in second receiving a total of seven nominations, which includes ‘Best Dance Performance,’ ‘Best Song of the Year,’ and ‘Best Video of the Year’ for his hit single ‘Go Crazy’ featuring Young Thug. Beyonce and Young Thug tie for the third-highest nominations, each receiving six.

The star-studded event will feature an array of extraordinary performances and special appearances from some of the highest regarded stars of the Black entertainment culture.

Directly following the event, DJ Cassidy will present the broadcast premiere of his virtual hit series, “Pass the Mic.”

Launched this past summer amid the coronavirus pandemic, “Pass the Mic,’ is a virtual sing-a-long in which fans connect with their favorite artists as they sing their most iconic hits.

In an interview with E! News, Cassidy explains why he believes people gravitated to the series.

The 2020 Soul Train Awards will simulcast on the following networks at 8PM EST on Sunday, November 29th; BET, BET Her, VH1, MTV2.