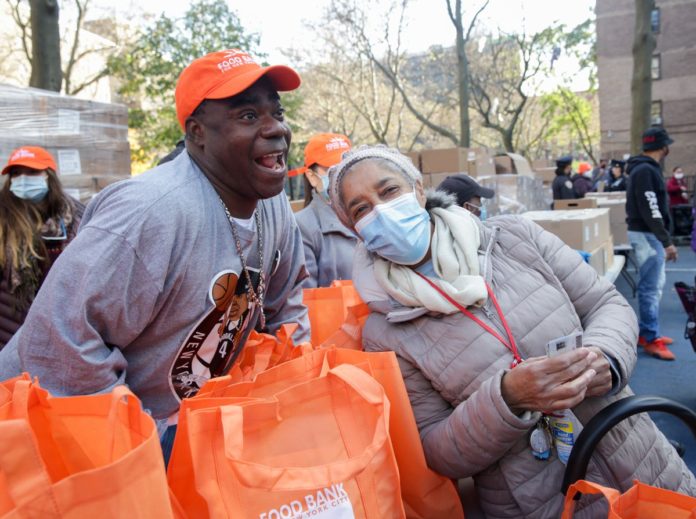 Comedian Tracy Morgan returns home to Brooklyn, New York to participate in a Thanksgiving food giveaway for residents within the community.

On Saturday (Nov 21st), Morgan assisted with giving out more than 1,000 turkeys to the residents in the area, according to the NY Daily News. Bedford-Stuyvesant is the community in which the comedian was raised prior to launching his career in comedy.

Alongside Morgan, as he participated in this community event were two of his children, his son Tracy Morgan Jr., 29, and daughter Maven. 7.

The turkeys were donated by Morgan, Stop & Shop, and Wakefern Food Corp. Along with the turkey, each recipient received coupons for holiday food items in order to make their Thanksgiving meals complete.

Residents within the community were extremely grateful for Morgan’s time and donations.

“I got a turkey, which is a big help,” says resident Suheily Rodriguez, 38. Although she works in the intensive care unit at a hospital nearby, COVID has put large financial restraints on her and her family. “Being an essential worker, then having to go to a supermarket and spend your own money to feed your family is difficult. We are all struggling.”

Morgan, who grew up in the complex, shook the hands of the residents, happily posed for photos with them, and even pointed up at the window of the apartment his parents once shared.

“I’d like to take a moment to wish everybody in the Tompkins project a beautiful holiday season,” Morgan said, according to the New York Post. “God Bless you. I love you.”

City Councilmember Robert Cornegy Jr., who also participated in the charitable event, refers to Morgan’s connection with the community as inspirational.

“Tracy grew up here, and that’s a phenomenal story,” said Cornegy Jr. “He can point to the fourth floor here where his parents met. That’s inspiriting for young people, to know that he came from here.”

See pictures from the community event below.