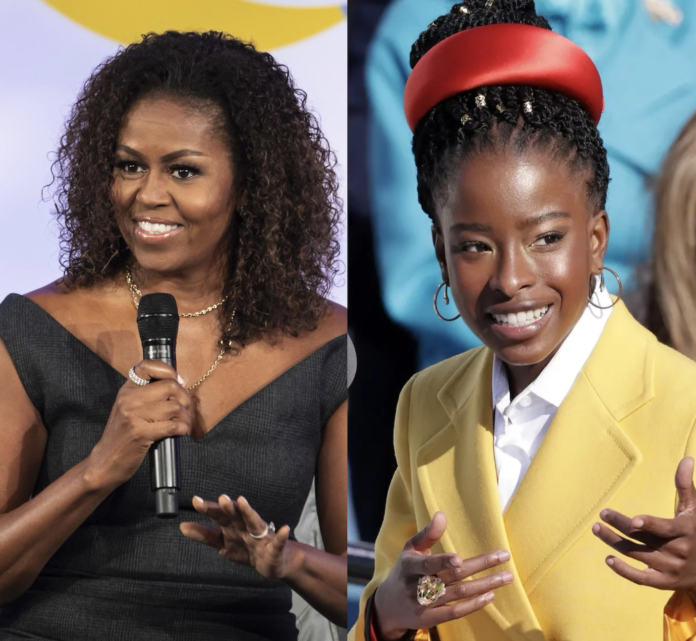 Former First Lady Michelle Obama and youngest inauguration poet Amanda Gorman collaborated with Time for a conversation centered around the Black renaissance, and the role black women play in art.

In a world where culture, and inspiration steam from Black art, “a surge of creativity” had been called the renaissance. The former first lady received insight on how Gorman sees herself in this period..

“We’re living in an important moment in Black art because we’re living in an important moment in Black life. Whether that’s looking at what it means politically to have an African-American President before Trump, or looking at what it means to have the Black Lives movement become the largest social movement in the United States. What’s been exciting for me is I get to absorb and to live in that creation I see from other African-American artists that I look up to. But then I also get to create art and participate in that historical record. We’re seeing it in fashion, we’re seeing it in the visual arts. We’re seeing it in dance, we’re seeing it in music. In all the forms of expression of human life, we’re seeing that artistry be informed by the Black experience. I can’t imagine anything more exciting than that.” said Gorman.

In the interview, Michelle Obama praises Gorman for her poem “The Hill We Climb” that she read at the Inauguration last month. She stated, “the confidence you exuded as a young Black woman helping to turn the page to a more hopeful chapter in American leadership, how did you prepare for a moment like that?”

Gorman responded, “When I first wrote the poem, I was thinking that in the week leading up to the Inauguration I would be rehearsing every day. But everything was moving so quickly, I actually didn’t get to really sit down with the text until the night before. Most of my preparation was stepping into the emotionality of the poem, getting my body and my psyche ready for that moment. There was a lot of the night-before performing in the mirror.”

The rising generation is a courageous one, calling out injustice and racism online and in-person while being active at protests in recent years. Gorman has been using her voice to demand change through her art, and when asked how art fits into these larger social movements if she thinks about these things as she writes.

“Absolutely.” Gorman continues, “Poetry and language are often at the heartbeat of movements for change. If we look to the Black Lives Matter protests, you see banners that say, They buried us but they didn’t know we were seeds. That’s poetry being marshaled to speak of racial justice. If you analyze Martin Luther King’s “I Have a Dream” speech, it’s a great document of rhetoric that’s also a great document of poetry, of imagery, of song. Never underestimate the power of art as the language of the people.”

Gorman goes into detail about how she draws her inspiration from black poets such as Yusef Komunyakaa, Sonia Sanchez, Tracy K. Smith, and Phillis Wheatley. She even went into detail on how she read a lot of Frederick Douglass, Winston Churchill, and Abraham Lincoln when writing the infamous inauguration poem. Gorman listens to composers who tell good stories such as Hans Zimmer, Dario Marianelli, and Michael Giacchino.

When asked about being seen as a prodigy, the poet responded, “It’s easy when you see someone who’s young have this type of astronomical life change to think that it’s instantaneous. I want to highlight that this took a lifetime, and it took a village. Something I haven’t told anyone else is, for the past six years whenever I’ve written a poem that I knew was going to be public or performed, I told myself, write the Inauguration poem. And what that meant for me is not necessarily write a poem that’s about a President. It was: write a poem that is worthy of a new chapter in the country. In everything you write, write something that is brave enough to be hopeful. In everything that you write, write something that is larger than yourself. I don’t think I would have been able to write that Inauguration poem if I hadn’t lived every day of my life as if that was the place I was going to get.”

Michelle Obama ended the conversation with one last question of advice, “Do you have any advice for young girls, and Black girls in particular, who earn their way into the spotlight?”

Gorman replied,”My question is do they have any advice for me. I’m new to this, so I’m still learning. I would say anyone who finds themselves suddenly visible and suddenly famous, think about the big picture. Especially for girls of color, we’re treated as lightning or gold in the pan—we’re not treated as things that are going to last. You really have to crown yourself with the belief that what I’m about and what I’m here for is way beyond this moment. I’m learning that I am not lightning that strikes once. I am the hurricane that comes every single year, and you can expect to see me again soon.”