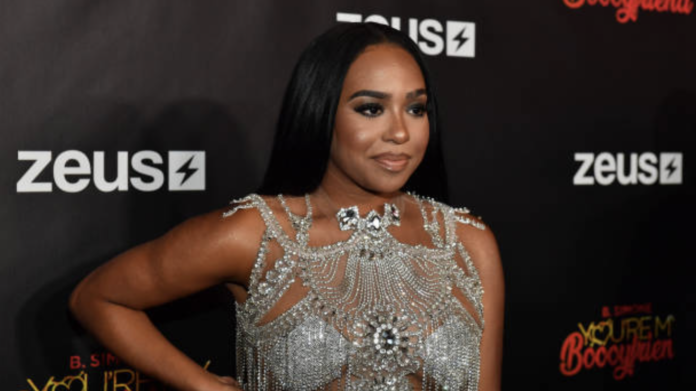 B. Simone has everything a girl can dream of. She’s an Recording Artist, an Actress, a Stand Up Comedian and has 2.6 million followers on Instagram. All she’s missing is a someone who is meant for her. After 7 years of being single, B. Simone created this reality show where she looks for her special someone, her Boooyfriend.

There are 10 men and 1 women that are living in a mansion fighting for her affection during the show. B. Simone spoke about her show during an interview at her premiere at Regals Atlantic Station in Atlanta, Georgia on Sunday, March 10th.

B. Simone had her friends come on the show to help her pick the perfect guy for her. Almost the friends list is Pretty Vee, Summerella, Pharaoh, Watch Jazzy, and MsJackYo, whom B Simone commented was “a tough cookies on these n***as too.”

Pretty Vee, who is B. Simone’s co-host on the show, touched on the kind of guy she wants for B, saying “I just wanted someone to come on this show and really show and look she’s a comedian, but they can definitely balance her.” B. Simone was told by one of her friends that “she dates the same type of guys”. She wanted to “step outside her box” and experience different types of people.

As viewers watch the show, they will see the different types of personalities with each contestant. B. Simone says that throughout the show they are going to see “organic comedy.” She reveals that because the platform is on Zeus, they wouldn’t have to censor themselves it’ll all be raw reality television.

The reality show premiered Sunday, March 10th on The Zeus Network. The Zeus Network is a black owned Entertainment Network based in Burbank California. According to The Verge Magazine “Zeus wants to be the Netflix of Influencers.” So watch out Instagram, and YouTube; Zeus is giving influencers a platform for Reality TV. Tune in to Zeus.com to see this show manifest and we’ll keep you updated, here on JaGurl TV