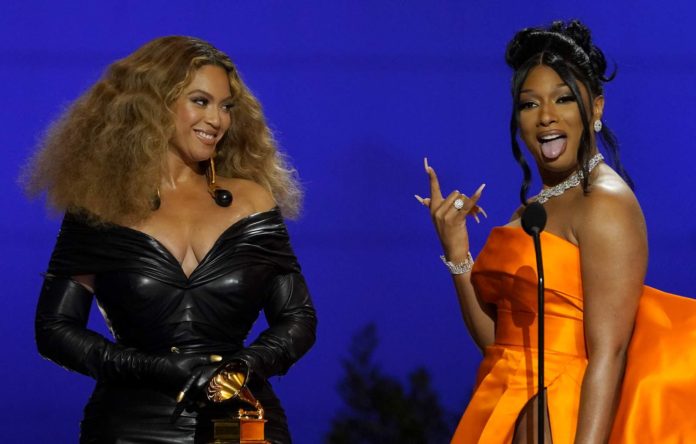 This past Sunday, Houston rapper Megan Thee Stallion and music icon Beyoncé made history at the 63rd GRAMMY Awards by becoming the first pair of women to win in the best rap performance category for their remix of Megan The Stallion’s single ‘Savage’.

Megan began her speech by saying “Thank you, Lord. God is the first person that I want to thank,” Megan said in her speech. “I just still can’t even believe this . . . just thank everybody who just is rocking with me and been riding with me for a long time. I love y’all so much. Thank you for just believing in me.”

Megan continues her speech by giving thanks to Beyoncé “I definitely want to say thank you to Beyoncé,” she continues “If you know me, you have to know that, ever since I was little, I was like, ‘you know what? One day, I’m gonna grow up and I’m gonna be like the rap Beyoncé.’ That was definitely my goal. And I remember I went to the rodeo for the first time and I saw Destiny’s Child perform,” she continued, “and I was like, ‘yes, I’m ’bout to go hard, I love her work ethic, I love the way she is, I love the way she carries herself.’ And my mama would always be like, ‘Megan, what would Beyoncé do?’ And I’m always like, ‘you know what? What would Beyoncé do, but make it a little ratchet.’”

Beyonce, we also joined Megan on stage to accept the award, said “I just want to quickly give my love to Megan,” Beyoncé added. “I have so much respect for you and I’m honored that you asked me to be a part of this song.”

Shortly after, Megan tweeted, “AHHHHHHHJHGJDKNBOOM,” with a bunch of crying face emoji. She also thanked her fans, adding, “Love you hotties.”

To add on the list of accomplishments, Megan also took home her first televised GRAMMY for best new artist.

Queen Bey also made GRAMMY history after winning her 28th GRAMMY over the years, making her the most awarded musician in GRAMMY history.

Congratulations to both ladies on their wins!