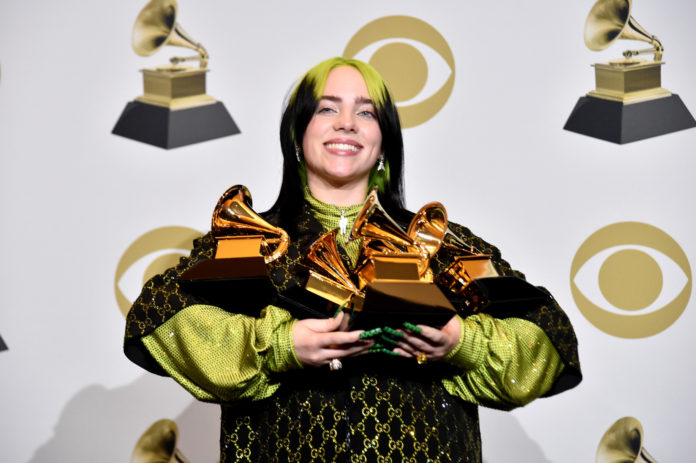 On Sunday January 26, all of our favorite celebrities and influencers came out to the Staples Center to enjoy a night of celebration in Los Angeles. The GRAMMYS is a night to recognize multiple artists’ musical accomplishments of the year. The 62nd GRAMMYS was hosted by Alicia Keys and had us on the edge of our seats as we prepared to hear the winners of the night. We were blown away to see singer, songwriter and 18-year old performer, Billie Eilish, alter the history of the GRAMMYS forever. Billie came through dominating five major categories as the youngest winner of multiple categories in the history of the award show.

This accomplishment is major for anyone but especially for Billie who is just getting her feet wet in the music industry. She won five of her six nominations, including song of the year, best pop vocal album, album of the year, record of the year and best new artist. Billie always talks about how she records songs with her brother, Finneas O’Connell, a fellow GRAMMY winner who co-writes and produces her music. They create touching music by working in the bedroom of their parents’ home in the Los Angeles. During her best new artist acceptance speech Billie said, “Mainly I think the fans deserve everything. I feel like they have not been talked about enough tonight because they are the only reason any of us are here at all. So thank you to the fans!” she continued collecting her second Grammy of the night by saying, “I know all the other artists that were in this category and I love you all, you are amazing, you deserve this just as much as I do. And I know your fans are hardcore, and they are gonna fight for you guys, and they love you and they are going to talk s*** for years because of this.” Her humor and gratefulness was adored by everyone.