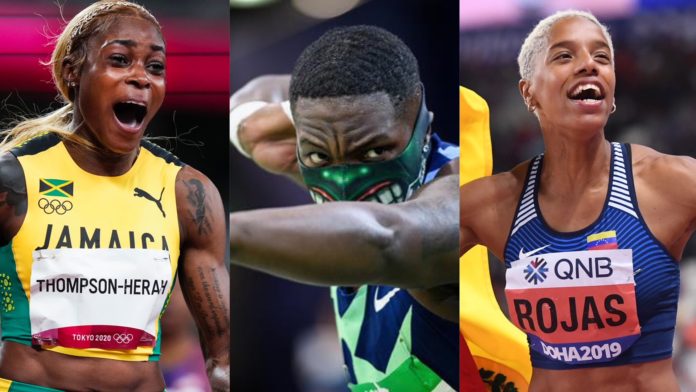 Alongside Naomi Osaka and Simone Biles are several other international Black women athletes that are sprinkling their Black Girl Magic all over the Tokyo 2020 Olympic Games.

The 29 year-old sprinter led Jamaica’s sweep of the 100m race. The Jamaican sprinter broke the previous 33 year old record, set by Florence “Flo-jo” Griffith Joyner in 1988. Thompson-Herah’s time of 10.62 is recorded as the second fastest time in history. The fastest time still belongs to cultural icon Flo-Jo, who ran 10.49 second in the 1988 Olympic trails.

Raven Saunders’ made team USA with a recording breaking shot pit. The Charleston native best throw was 19.96 meters (65 feet and 6 inches). During the Olympic Games, Saunders threw a 19.79 earning the silver. The 25 year-old celebrated by twerking in front of the Olympic camera crew. The Olympian has always used her voice and platform to bring awareness to her community. While accepting the silver on the podium, the athlete formed an “X” with her wrist. She said the “x” represents the intersection where all oppressed communities meet.

The Afro-Venezuelan athlete set the record for the Olympic women’s triple jump. Rojas jumped 15.67 meters, which shattered the previous record of 15.50 set by Inessa Kravets.

These queens are setting the tone, and inspiring the next generation.