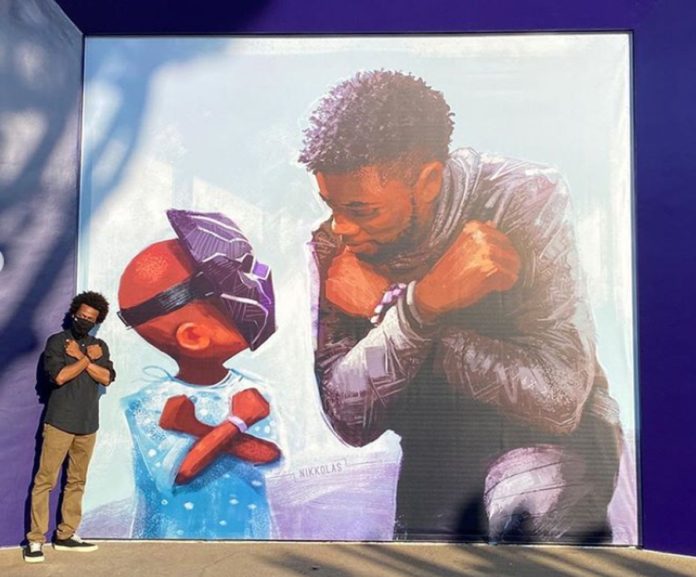 This year we sadly lost beloved actor, Chadwick Boseman, in late August due to colon cancer taking over his health. The loss was so sudden and the world is finding ways to cope with the unexpected tragedy. We all grieve in different ways but according to one Hampton University alumni, it doesn’t all have to be so sad.

Professional concept artist, author and illustrator Nikkolas Smith, debuted his original artwork on his Instagram page on August 29. Boseman is seen kneeling next to a young child who is outfitted in a hospital gown while also wearing a Black Panther mask. Both have their arms up and crossed in the signature Wakanda salute. The watercolor style painting shows a small glimpse of the impact Boseman left on the world.

“He would never let the kids see that he was fighting cancer too… To them, he was and will forever be T’Challa… The King✨
A portion of the proceeds of this print will go to @childrensla and @stjude (www.Nikkolas.Art) . #LongLiveTheKing
PS: Black Panther global stream starts Tonight at 8pm EST. 🙏🏾👊🏾🐾✨
#BlackPanther #RIPChadwick#ChadwickBoseman #CHLA #StJude#WakandaForever“

Most thought that the homage stopped there but Disney had other plans. Smith surprised his fans with a second post about the painting but this time on a bigger scale. The painting was transformed into a mural in the downtown Disney district in California for all to see.

“It is a full circle moment for me: my final two projects as a Disney Imagineer last summer were working on the Children’s Hospital project and the Avengers Campus. To millions of kids, T’Challa was a legend larger than life, and there was no one more worthy to fill those shoes than Chadwick Boseman. I’m so thankful to be able to honor Chadwick’s life and purpose in this way. “