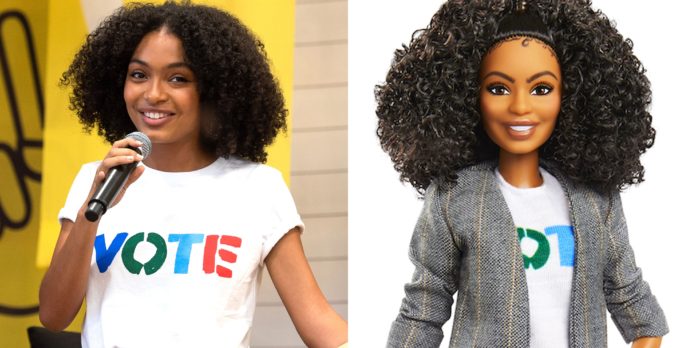 The Grown-ish star’s Barbie was originally launched last spring to celebrate International Women’s month and Barbie’s 60th anniversary. The Yara doll was a part of a role model series that highlights notable women who are promoting change.

Now, with the 2020 Presidential Elections quickly approaching, Mattel has relaunched the iconic doll to encourage voter participation and reinforce the importance of voting.

The doll looks identical to Shahidi wearing one of her most iconic looks, supporting a grey pinstriped power suit and Tory Burch “Vote” t-shirt, which the actress wore to the Eighteen X 18 Presents We Vote Next Summit.

Once the Doll was released Shahidi took to social media to express her gratitude.

“I am honored to be repping all the young ones as a Barbie Role Model,” Shahidi writes. ” Let’s continue to inspire the next generation and each other. We need your voices and are watching you all Blossom and shine!”

The doll officially relaunches on Oct. 9 but is currently available for pre-sale exclusively on barbie.com and Amazon.