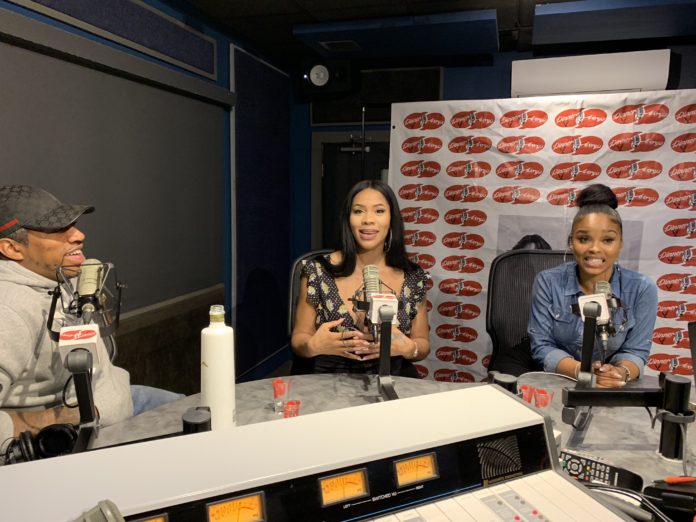 Reality TV Star, Deelishis, was a guest star on the Dinner with the Avery’s Podcast. The hosts Dj Holiday, and Ebony Avery discussed various topics with Deelishis that was filled with amazing advice, heart filled conversations and laughter.

Dj Holiday and Deelishis started the podcast off by mentioning they bumped into each other at a Drake after party, and reflecting on that her and Holiday first time meeting each other was actually at a Drake party in Toronto. They then jumped into Deelishis living in Atlanta where she highlighted her daughter is in college, her relocating after her 4-year contract with a radio station in Detroit was up, and her figuring out what was next up for her in life, as she is now 40 years old.

They went into Deelishis dating life, and she explained that there isn’t much spectacular happening. She did say she is seeing someone though. Dj Holiday tried to get an exclusive, but Deelishis stated that she will tell him off air but she did mention the mystery guy works in the industry. They then dabbled what standards were for women to take men serious, which led to Deelishis talking about her dating Flavor Flav and being judged for dating Flav. Deelishis explained that in Detroit where she is from, the worst chicks would be dating some of the roughest looking dudes, “but the dudes were handling their business and that’s what attracted them.”

They went into their topics section of the show and Deelishis discussed the phrase “clout chasing” and Nipsey Hussle’s death. She discusses how she actually appreciates how everyone shows love to Nipsey and is highlighting all of the wonderful things Nipsey was doing, and she doesn’t appreciate how the generation calls it clout chasing when someone posts Nipsey trying to pay him homage for what he’s done. They also discussed the incident with Kodak Black and T.I. as well.

After a few different topic discussions, food discussions, they also played a game of ‘Never Have I Ever’. Their last section of the show was “Fan mail’ where fans got to ask Deelishis different questions. One of them being “Did you sleep with Flavor Flav?”

Deelishis responded with “Did I have sex with him, never. But not because I didn’t want to..”

She elaborated that they were in a relationship because she had won the show, that lasted for up to 4 months. She went into how her and Flavor Flav did a huge party in Houston in Mike Jones club, and she ended up getting drunk. She stated that she tried to get things popping with her and Flavor Flav in the hotel room and he sweetly turned her down. Deelishis then recently said that Flav actually had a girl the whole time. Whew! Deelishis also stated that Flav respected her and that she was very attracted to him.

The one hour podcast with Dj Holiday, Ebony Avery, and Deelishis was full of realness. You can tune in to them on soundcloud or listen to the episode below.