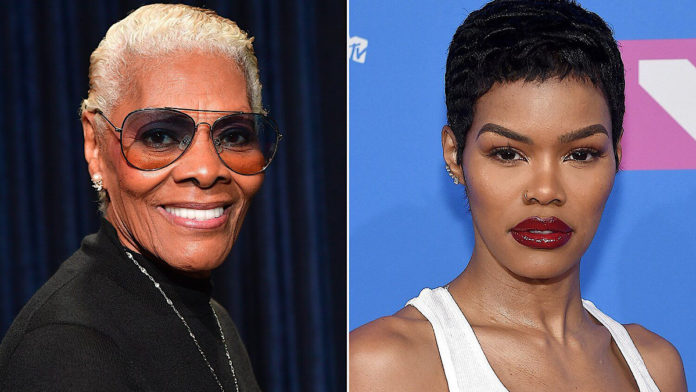 Social media can be crazy at times but a lot of good things can come out of it. After Dionne Warwick tweeted that she wanted Teyana Taylor to portray her in a biopic, the legendary singer confirmed that the collaboration is in the works. Yes that’s right, it has been officially confirmed ladies and gentlemen!

“It’s going to be a series, we’re planning to do an episodic type of a show,” she announced during an interview with Entertainment Weekly. “[Teyana] is certainly a talented young lady with whom I’ve had the pleasure of interfacing. In fact, we had a conversation last night on the telephone. She’s very excited about the prospect of being involved and she’s also going to be very, very much involved in directing it and putting together parts and parcel of how we see this going.”

Fans have always said how much Teyana looks like Dionne over the years. This was destiny to happen. Teyana has expressed her excitement to portray the legendary singer. “When the LEGENDARY @therealdionnew had this moment w/ @netflix & they started jotting notes in their palm pilots…I was lookin at them likeeeeeeeeeeeeeeeeee,” the Harlem native wrote on Instagram. “P.S. One thing about them doors…..They open,” she added, referencing her retirement from music.

Netflix will be the home of this collaboration, which their team seems to be excited about as well. Netflix responded to Warwick’s tweet by saying “Taking ✍🏾 Notes ✍🏾”.

Get ready y’all, this is going to be epic!