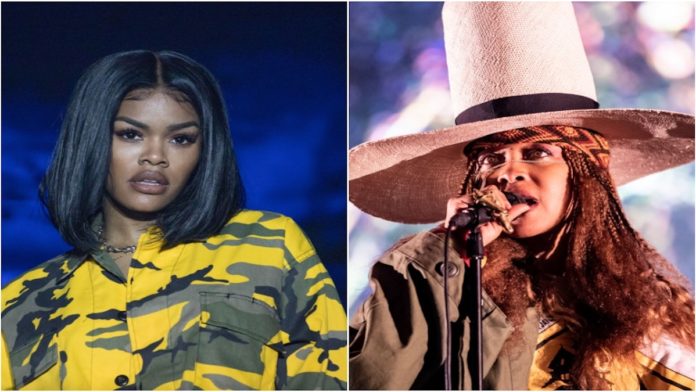 We know the iconic Erykah Badu to be the multitalented entertainer she is. When she’s not making hits, the mistress of soul is delivering babies. This time, she will take her midwife certification to assist with Teyana Taylor‘s birth of her second bundle of joy.

Teyana Taylor announced her second pregnancy earlier this month during her music video “Wake Up Love”. In a conversation with Nick Cannon on his radio show Nick Cannon Mornings, she revealed that Erykah Badu will be the one to deliver her second daughter at home.

Badu has been involved in midwifery since 2001, has gotten her certification and actively practices. So far she’s delivered over 40 babies and soon she will add Teyana’s to that list.

Many know the story of Teyana and husband, Iman Shumpert‘s, unexpected home birth of their first child Junie in their bathroom. It seems like Teyana wants things to go a little smoother this time around.

“You know what’s crazy, even though the Junie story is crazy, it kind of put me in a comfort zone where I don’t—I  don’t know if i want to go to the hospital for this next baby,” Teyana told Cannon.

With both Teyana and Erykah Badu in the same room, it is sure to be a vibe. That baby will be brought in the world surrounded by voices of angels.