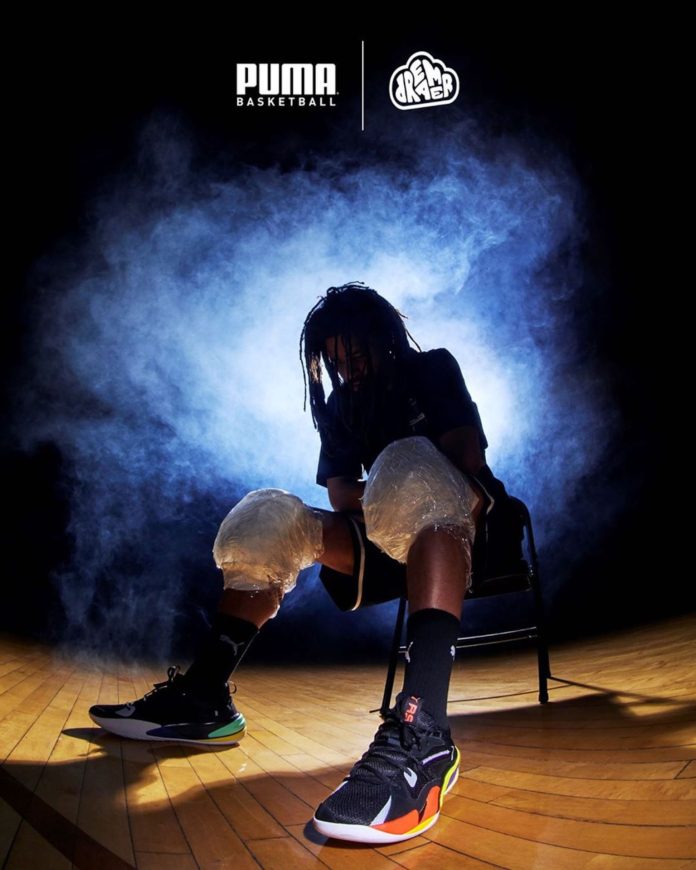 On July 31st, J. Cole and PUMA officially debuted their first footwear collaboration: the RS-Dreamer basketball shoe. The release of the shoe came accompanied with the news that J. Cole is training for a serious NBA career, so the collaboration was fitting.

Cole’s sported a DREAMER logo on the heel and explained the logo, stating “When said out loud, all the best dreams sound crazy. Dreamer was created with the belief that, still, we must follow ours, no matter how unachievable they may seem to others.”

This is sneaker is designed to be a combination of basketball-specific ProFoam with a traction pattern for all-surface grip and the style be worn casually as well.

“Over the years, basketball shoes have progressed greatly in their level of technology and comfort but have strayed too far away from designs stylish enough for cultural relevancy” says Cole. “The Dreamer hopes to change that reality. The highest level of on-court performance meets the highest level of aesthetic design for daily wear. Once again, you can hoop in the same shoes you wore outside.”

Now Cole and the PUMA team are releasing the third and fourth edition of the shoe with the “Purple Heart” and “Concrete Jungle” colorways, for a more versatile style.

We have already spotted the shoe on NBA courts. Kyle Kuzma and Danny Green of the Lakers and Derrick Jones Jr. of the Miami Heat have been seen rocking their individual color way choices on during the pre-season.

The J. Cole x PUMA RS-Dreamer “Purple Heart” and “Urban Jungle” are both set to release via the PUMA webstore and retailers on August 21 for $125 USD.