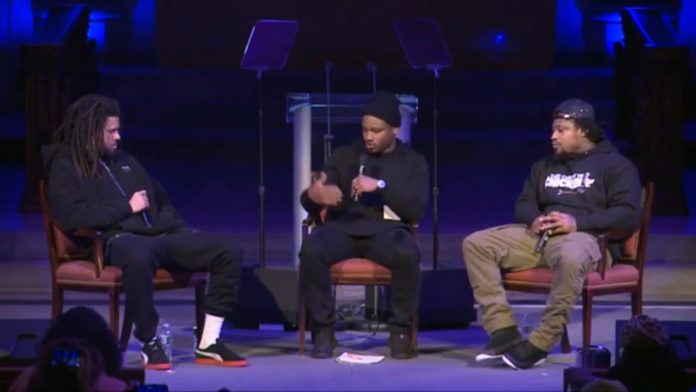 For the 2020 MLK holiday, a panel including J. Cole, Marshawn Lynch and Ryan Coogler came together to discuss issues impacting black lives. Topics ranged from the life expectancy of the Black male, to relations between the NFL and black players.

The three men, all with very different careers, were a part of the annual MLK Now panel for its fifth annual event. Hosted by Blackout from Human Rights, the event took place at the historic Riverside Church in Harlem, New York. This is the same church where King gave his 1967 speech, “Beyond Vietnam: A Time to Break Silence.”

Filmmaker Ryan Coogler (Black Panther) and NFL athlete Marshawn Lynch, both from the Oakland, California area had similar experiences growing up. The men discussed what they have done to sustain successful careers. J. Cole attributed thinking ahead as one of the tools that has helped him. He used the analogy of an athlete who wants to make it to the league. When he does the work, ethic slows down and the decision making gets shaky.

“When I got a record deal everyone was like, ‘Oh my gosh you’re signed to Jay Z!’ I’m looking at that bank account, and more importantly, I’m looking at what I haven’t done. I’m like…I’m barely celebrating this. So, I think sustainability comes from looking ahead and being very clear on what you want.” said Cole. Seahawks running back Marshawn Lynch said that for him it is about never getting content. “Every day that I wake up, I try to maximize and live that day to the fullest. So, every day is like a new challenge for me. It gives me an opportunity to go ahead and accomplish something that I didn’t accomplish the day before.”

Moderated by Coogler, the men went on to explain the ways in which they act to bring light to social issues that affect the community. Cole discussed how receiving the book The New Jim Crow impacted his album and tour.  Lynch talked about how visiting an impoverished area of Brazil for a football camp opened his eyes to how some of the areas were worse than where he grew up. He talked about how the children in the camp followed directions well even thought there was a language barrier. From there, he began visiting new countries each year to hold a football camp. He went to Nairobi, and helped to build a watering system for a whole community. He knew that his reach was bigger than Oakland.

MLK Now serves as a forum inspiring audiences to take action in their communities and creating an inclusive space for all people to come together deeply rooted in love, compassion, community, and justice.