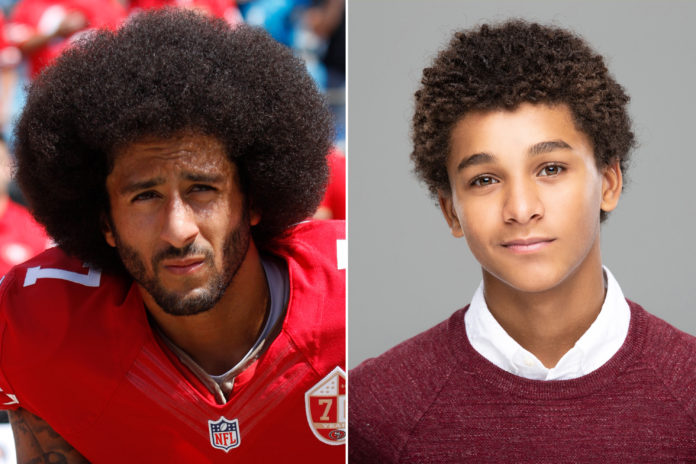 The Get Down‘s star Jaden Michael will be portraying a young Colin Kaepernick in the upcoming Netflix series, Colin Black and White.

Netflix announced the six-episode series back in June. The series, which will be produced by Ava DuVernay, will provide an inside look into Kapernick’s adolescence, as a young black child adopted by a white family attempting to find his identity.

“Too often we see race and Black stories portrayed through a white lens,” said Kaepernick back in June. “We seek to give new perspective to the differing realities that Black people face. We explore the racial conflicts I faced as an adopted Black man in a white community, during my high school years. It’s an honor to bring these stories to life in collaboration with Ava for the world to see.”

Kaepernick twitted the casting news Tuesday (Oct. 27th), showing a split image of him as a highschool football player and Michael side by side.

“I never thought I would be casting a young me in a show about my life,” Kaepernick tweeted. “I can’t wait for the world to see @its_JadenMichael be an all-star on @netflix #ColinBlackandWhite @Ava”

Durvernary retweeted the post and adding a special thanks to Michael Starrbury who will write and serve as executive producer. “Collaborating with @Kaepernick7 on this series has been a proud journey” Duvernary tweeted “Thanks to @Netflix and our partner @StarrburyMike. A story about identity, imagination, and intention. Congrats @ItsJadenMichael!”

Kaepernick played six seasons in the NFL as the quarterback for the San Fransico 49ers. He captured the nation’s attention in 2016 when he began kneeling during the national anthem at the start of every NFL game.

His decision to kneel during the national anthem was to bring attention to America’s issue with police brutality and systematic racism. The peaceful protest started by Kaepernick spread to other NFL team sidelines, soccer fields, and even high school football stadiums. The protest to stop racial injustices sparked a lot of controversy regarding the definition of patriotism in America.

Kaepernick’s protest may have cost him his football career, but it sparked a movement that continues to this day. His Netflix show, Colin Black and White, will highlight how his early life experiences shaped his activism.

Netflix has yet to announce a release date for the upcoming limited series.