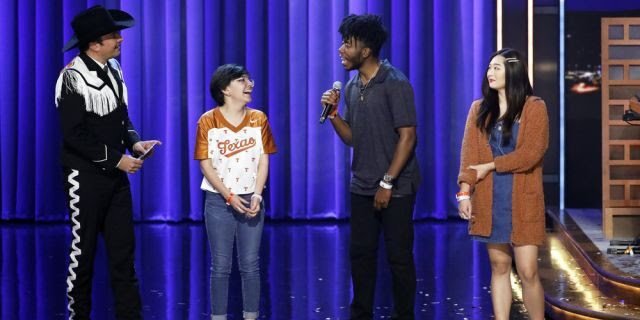 Alma Zamora, Elizabeth Yun, and Fitzgerald Alan from University of Texas had no idea what was in store for them as they visited the The Tonight Show with Jimmy Fallon.

Enjoying the show like the rest of the audience, Fallon invited the three students up on stage. Having them introduce themselves to everyone, the talk show host went on to tell them that they have won new smartphones thanks to Samsung. In addition they also won a bunch of holiday goodies.

That was not all though! Encouraging the students to come and take a selfie, Fallon stated  “Since we’re the Tonight Show and we’re at UT, Samsung wanted to take it up a notch. Listen carefully. Samsung is going to pay for the remainder of your college tuition.”

That’s right! These students no longer have to worry about their tuition.

Having them in awe, each student gave a speech stating how thankful they were to receive such a generous gift.

According to CNN Entertainment, Samsung worked with The University of Texas to find the three students.

“Samsung is proud to equip these exceptional undergraduates with the tools they need to take their academic and creative talents to the next level.” The company stated.

Congratulations to these students!