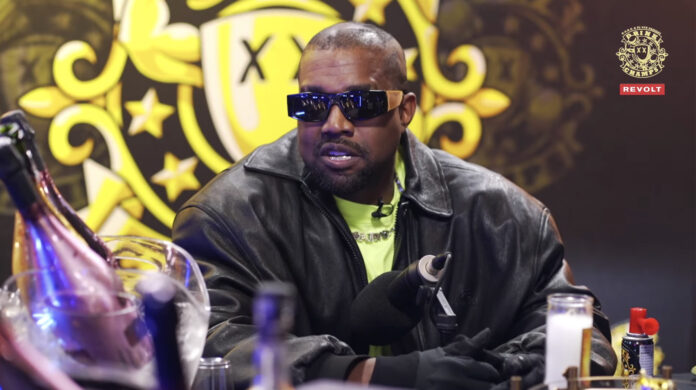 Kanye West‘s new interview with REVOLT TV is doing numbers! As we all know when Kanye West speaks his mind, he does not shy away from being blunt and telling it like it is. In his new interview on REVOLT TV’s Drink Champs, co-hosted by N.O.R.E. and DJ EFN, Kanye opened up about a few hot pics viewers were eager to know. Some hot topics included his alleged “divorce” from Kim Kardashian, the never-ending entertainment beef he has with Drake, and the decision to feature Marilyn Manson and DaBaby on his new album “Donda”. It truly was a legendary and historical moment in more ways than one.

According to media outlet Variety Magazine, the conversation with N.O.R.E., D.J. EFN, and Mr. West himself was about two-and-a-half hours long and compiled 3 million viewers within its first 24 hours of release. According REVOLT TV, this is the most viewers this black owned multi-media platform has had for a single episode to date. The interview aired this past Thursday on Youtube and quickly became the number one trending on not only YouTube but Twitter as well. “Revolt’s long-term partnership with ‘Drink Champs’ is a perfect example that we are more powerful together when we use our platforms to control our narrative and give the voices shaping our culture the freedom to create unapologetically,” Deon Graham, chief brand officer of Combs Enterprises, said in a statement to Variety. “N.O.R.E. and DJ EFN continue to be proven leaders in this space and deserve to be acknowledged in this moment for creating a program that every power player in hip-hop has to visit. This show is on track to be the most viewed hip-hop interview of all time.”

People love controversy, but it is important to point out the moments when West was being authentic and poetic in his message. A significant moment from the interview includes West pointing out he is not divorced from his wife Kim Kardashian. The 44-year-old rapper reveals that him and Kim are not divorced despite what was said on SNL.

Despite the jokes, West emphasized that their four kids want their mom and dad to be together. “‘SNL’ making my wife say ‘I divorced him’ on TV because they just wanted to get that bar off. I ain’t ever even seen the papers. We’re not even divorced. That ain’t no joke to me. My kids want their parents to stay together,” he continued. “I want us to be together”.

He continued speaking his truth by also responding to all questions about Drake, who have had a healthy rap competition for years. West compared it to a sports rivalry and explained Drake has “added greatly to the culture”, whose music is possessed of great sophisticated melody, and that he and Drake are on the same team. Finally, he defended his artistic decisions on his “Donda” album. “All the ‘Me Too’… like, when I sit next to Marilyn Manson and DaBaby, right after both of them got canceled, for five songs, you know, it’s like they can’t cancel a song,” he said. “They’ll hit you with the accusations or somebody who you was with 10 years ago. And also, there’s women who’ve been through very serious things, pulled in alleys against their will; that’s different than a hug, but it’s classified as the same thing. It’s power and politics. You know, power-hungry maniacs and just control. This is ‘1984’ mind-control we’re in.”