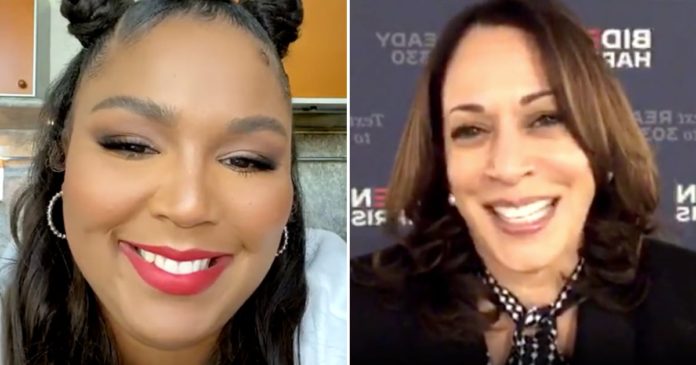 Lizzo is adding herself to the long list of celebrities who are advocating the importance of the 2020 election. The singer is using her platform to connect with her audience about pressing issues. In an effort to continue these important conversations, Lizzo went on Instagram Live with Senator Kamala Harris who provided her insight.

On Friday, September 18, the Grammy winner partnered with the candidate in honor of National Black Voter Day, which was hosted by BET, the National Urban League, and other partner organizations.

Harris is keeping up with the ever-changing times by using social media to her advantage. Similar to Presidential candidate Joe Biden going on IG Live with rapper Cardi B, Harris spike on her campaign and listened to the concerns and expectations of Lizzo.

“We live in a culture that demands accountability, especially from our public figures. You and I are not excluded from that, we’ve both known our fair share of backlash. I have seen backlash sometimes about your policies being anti-Black,” Lizzo said in her first question. “How do you feel about that, and how does that inform your campaign for VP so that Black people feel heard?”

Harris explained that her intentions were always to “to go inside the system to see if I could fix it from the inside.” Years later and she still follows that mindset. “We really ought to know the power that we have in every place, and never decide that any one place is excluded from us being there to get the kind of change that we want,” she said. “So I made the decision to go up the rough side of the mountain, to go inside the system, but I also understand the brilliance of being outside of the system when you have the brilliance of Black Lives Matter and that movement and what it has done to force change.”

Voter suppression is a real concern in this country, but they express how it is your right to have to correct tools to vote in this country. “The moral of the story is vote, vote, vote, vote, vote,” Lizzo said after their call was over. “Do not be discouraged. Do not feel swayed either way but just use your voice, period.” She also touched on what she described as an “insane amount of privilege to be able to speak to a candidate” for national office, “but the fact that I can was important to me because I need to know things. I’ve got a lot of questions and I need to know.”

Watch the full IG Live below: