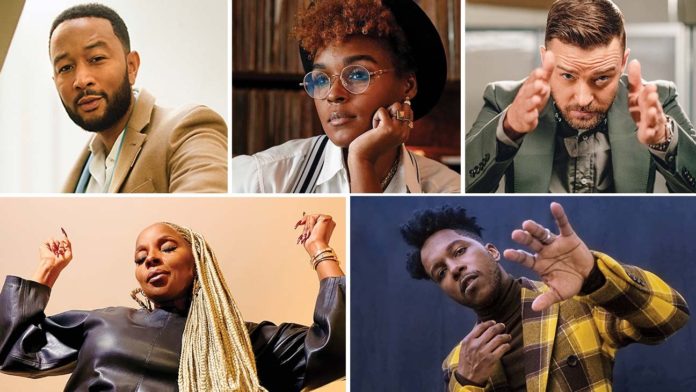 The Hollywood Reporter’s annual round table included the best songwriters of this year. Janelle Monae, Mary J. Blige, Justin Timberlake, Leslie Odom Jr., and John Legend reflect on the global pandemic and their personal connections to Stacey Abrams‘ voting rights documentary, All In: The Fight for Democracy.

Janelle Monae found the inspiration for her song “Turntables” from her father’s incarcerations.

“There were people in the documentary like my dad,” Monae shares. “My dad was in and out of prison growing up. And he also was addicted to drugs. But instead of, like, rehabilitating him, they threw him in prison and also took away his right to vote. And so, you know, I had to do it for my father.”

“I was inspired by the young people in our film,” Legends tells the Hollywood Reporter. “Giving Voice is about these young people from all over the country. Many of them come from challenging circumstances, tough neighborhoods. They all have committed themselves to being actors. They competed in this August Wilson [Monologue] Competition, they made it all the way to the finals in the competition that was on Broadway. And they were getting a chance to have their voices heard and live out their dreams.”

Legend admits that watching the children’s creative spark reminded him of himself as a child.

“I saw myself in those young people,” Legend confesses. “Since they were kids, they knew they were supposed to be doing what they’re doing. Each of us up here probably felt that when we were kids, that we were supposed to be doing what we’re doing right now. I was truly inspired by those young people having the perseverance, the tenacity, the resilience, the passion, the love, that got them through those tough circumstances– and that I believe will get them through so many other situations in life.”

“I was one of those kids who really had a fire inside of me,” Legend adds. “I had music inside of me, I had my passion, my beliefs, and I wanted the world to hear what I had to say.”

Reflecting on his growth as an artist and as a man, Justin Timberlake adds how juggling that fire within can sometimes be challenging.

“I always felt like the work that I did when nobody was watching was the most important work,” Timberlake says. “I come from a creed and a generation that the hardest job you have is to make it look like it all just came so easily to you, you know? And if you do have that fire, then you are going to skip those functions, skip those hangouts- you are going to skip some of it. You become a real adult when you find out that every decision you make comes with opportunity, but it also has to come with sacrifice.”

The global pandemic has given a lot of people, including R&B legend Mary J. Blige, a chance to self-reflect.

“During quarantine, I learned a lot more about Mary J. Blige,” Blige shares. “I never ever really had the confidence to go back and listen to any of my songs. But for some reason, I felt like I needed to do that. And what I found out is that when I was younger, I was older.” she explains.

“You know because a lot of things that I say in the “My Life” song and then the “Work That” song that Kamala [Harris] keeps using. When Kamala came out with it recently, I said, “Let me go back and listen to the Growing Pains album.”

By reflecting on her past albums and hit songs, Blige was about to see the beauty in some of the hardest moments of her life.

“I didn’t realize how, uh, inspiring the album was” Blige adds. “Because I was doing it. I was in hell. I was in all types of hell and then when it came out, I was in more hell, so I couldn’t really enjoy that success. So finally I got the chance to listen to the album from top to bottom.”

For Blige, revisiting her past hits reminded her of her ability to uplift women in her music.

“It’s every girl out there in the hood, every woman right now running for who she truly is, the beauty in her. Me doing the same thing. So [these are] things I needed to hear to help me get my inner wok done. Inner working, like my spiritual work, you know–not stinking thinking. Not thinking negative about life, about myself. Because people like me grew up in environments that were bad and where women suffered.”

“So Yeah, I wear it now because I suffered enough and the suffering is great. I rejoice in that suffering because now I can carry it like a mantle. Without cockiness or arrogance, but with knowing who I am. And it came back to me during quarantine. I need that healing.”

As the stars look forward, Timberlake defines 2021 with one word, “Redemption.”

“Redemption is the first word that comes to mind, and that encapsulates a lot,” says Timberlake.

“You know hitting a rock bottom, you always have the possibility, the chance at redemption,” Odom adds. “If you admit that it’s a rock bottom, if you learn the lessons, if you are honest about what it took to get you there- that is the chance that we have right not. There are many people who saw the insurrection coming.”

“My experience after 2020, and even in 2021, there’s some truth that we, as a country, still haven’t been admitting to ourselves. My relationships, my conversations, have gone deeper now than they ever have before. So there’s still a possibility that the truth will ultimately make us free.”

Be sure to watch these artists and their powerful songs in Stacy Abram’s inspiring documentary, All In: The Fight for Democracy on Amazon Prime.