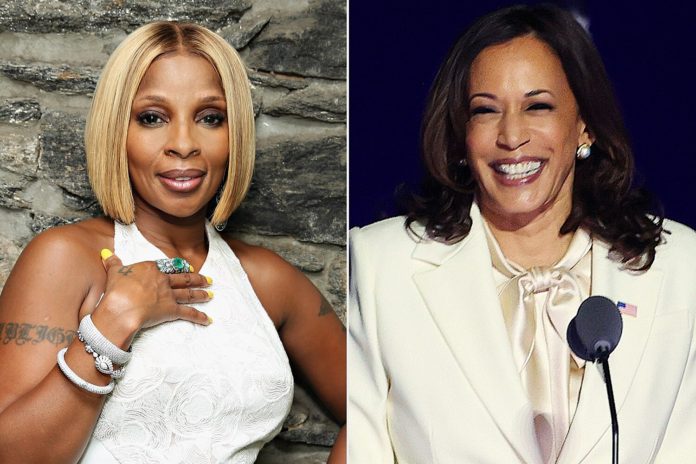 In an interview with BET, singer Mary J. Blige shares how Vice President of the United States Kamala Harris helped build her confidence.

Last year after being elected VP, Harris walked out on the stage to Blige’s song “Work That” on Nov. 7th, 2020.

Blige’s initial reaction was “surprise” that Harris use her song for her Electoral speech.

“I was buggin’,” Blige tells Angie Martinez in the premiere of iHeartRadio Living Black. “I was so surprised because people were calling me; I didn’t know what the hell was going on.”

The singer tells BET, that although she hasn’t spoken to Harris recently, she hopes the VP feels her love.

“I haven’t spoken to Kamala since she became the Vice President,” says Blige. “But I know she’s been seeing me out there sending her so much love saying, ‘thank you so much for continuing to help me build my self-esteem.”

The Grammy-award winning singer recalls when she first met Harris and how that encounter helped build her confidence.

“I met her years ago when I was down in the dumps,” the singer shares. “and she just lifted my spirits then. She was like ‘I’m a huge fan, I’m Kamala Harris.’ and I just knew she was a major important woman. And then this all started happening, and she’s coming out to ‘Work That’.”

“I said ‘she’s really a fan,'” the singer explains. “because it’s not ‘Just Fine’ and ‘No More Drama’, this is a song that’s not a single that people don’t even really know about unless you’re a Mary J Blige fan.”