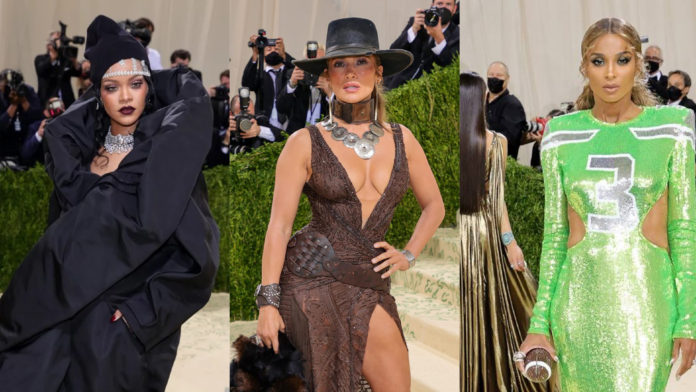 Since its first event, held in 1948, the Met Gala has also displayed creative and unique forms of fashion and trends. Vogue referred to the event as has “fashion’s biggest night. The evening is fueled by creative styles and interpretations of the event’s theme. Sunday night’s Met Gala 2021 theme was “American Independence.” Celebrities and fashions designers played with elements of what they considered American freedom, from stars to powder white wigs, while others worked to redefine what we view as America’s independence.

The Met’s Costume Institute curator, Andrew Bolton, spoke with Vogue and explained the importance of this year’s theme.

“I’ve been really impressed by American designers’ responses to the social and political climate, particularly around issues of body inclusivity and gender fluidity, and I’m just finding their work very, very self-reflective,” he said. “I really do believe that American fashion is undergoing a renaissance.”

Below are the top 5 looks of the evening; watch as these stars redefine what American Independence looks like.

Rihana and ASAP Rocky made their red carpet debut as a couple at Sunday night’s Met Gala. Saving the best for last, the couple was the last to appear on the carpet. The Grammy-award-winning singer closed out the evening with a ruffled and voluminous black Balenciaga overcoat and matching hat by Demna Gvasalia. The ensemble was a chic and couture representation of an all-American style. She paired over 267 carats of Bulgaria diamonds to complete the look.

JLO arrived at the event with boyfriend Ben Affleck. The singer wowed the crowds in a remarkable beaded brown Ralph Lauren gown with a plunging neckline and high slit. The star incorporated the theme of the evening by adding styled accessories to complete the look, such as a feather bolero jacket, a wide-brimmed hat, and chunky jewelry.

On her first year attending the Met Gala, Saweetie paid homage to her roots. The rapper stepped onto the carpet wearing a shimmering red Christian Cowan gown. The gown featured an asymmetric neckline, cut-out bodice, and a high slit (via Teen Vogue). From the gown’s skirt traveled two panels; each iridescent panel displayed two different and distinct color schemes. One panel represented the Filipino Flag and the other the Black American Flag. The two flags extended from her body, representing the two cultures composing the “My Type” rapper’s background. Allowing her dress to remain the centerpiece, Saweetie paired the look with a platinum blonde bob and dangly diamond earrings.

Grammy-winning singer Ciara stepped onto the red carpet wearing a gown channeling her husband and Seattle Seahawks quarterback Russel Wilson. Noting nothing is more American than football, the signer donned a green, backless gown with Wilson’s No.3 on it. She paired the gown with Wilson’s Super Bowl XLVIII ring and a football shape clutch.