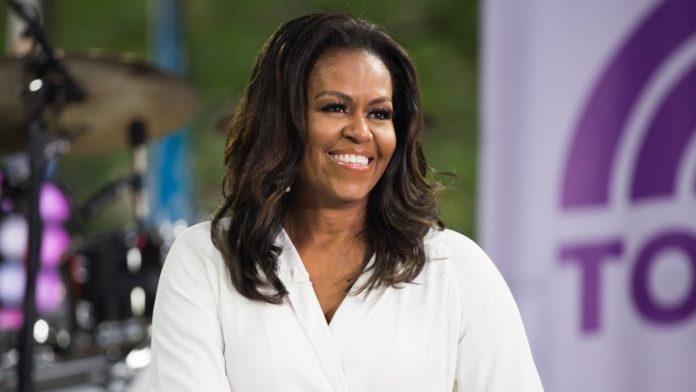 Towards the end of 2019, Michelle Obama wrapped filming the series and it is finally premiering in March. The former first lady is starring in the series as Mrs. O, a supermarket owner who helps two puppets named, Waffles, and Mochi travel to kitchens, restaurants, farms, and homes to cook recipes with home cooks, renowned chefs, kids, and celebrities.

“I’m basically being myself,” the former first lady says. “The entire concept is fun … an adventure.”

But like others during the on-going pandemic, she had to readjust her life, experience depression, and unexpected blessings.

“These have been challenging times. Many people have struggled: jobs lost, people going hungry,” she says. “We’ve learned to count our blessings, the importance of health and family.”

The Obamas have been isolated together during this time. Former President Barack Obama, and their daughters Malia, and Sasha have spent their times in between their family homes in Washing, D.C., and Massachusetts. The two girls were supposed to be away at college but due to the shutdown both Malia, Harvard University Senior, and Sasha, University of Michigan Sophmore was sent home to continue class virtually.

“Our girls were supposed to have emptied out of my nest,” Mrs. Obama explained to PEOPLE. “I was sort of celebrating that they were out building their lives and allowing me the emotional space to let them go. Well, they’re back!”

Mrs. Obama says the girls being back was an unexpected blessing and allows the family to recaptured moments and made their relationship stronger.

She also has a new hobby that took her months to master.

“Knitting is a forever proposition You don’t master knitting, because once you make a scarf, there’s the blanket. And once you do the blanket, you’ve got to do the hat, the socks.  … I could go on about knitting!” Mrs. Obama says.

But that’s not the only skill the former First Lady taught herself.

“Over quarantine, I actually did teach myself how to be a better lap swimmer, because what I’m finding in my old age is that the high-impact stuff that I used to do, as I’m approaching 60, it just doesn’t work. So I thought, well, swimming is one of those low-impact, good cardio things,” Mrs. Obama says. “I worked myself up to almost a mile of swimming laps. Now, can I do that right this second? No. But this summer, I’m getting back into the pool.”

As fun as it was teaching herself new skills and bonding with her family in their new normal, Mrs. Obama says the pandemic and the societal events affected her mental health.

Mrs. Obama says a lot of hard stuff was going on during that time, especially the George Floyd video, “That’s a lot to take on, not to mention being in the middle of a quarantine. Depression is understandable during these times. I needed to acknowledge what I was going through, because a lot of times we feel like we have to cover that part of ourselves up, that we always have to rise above and look as if we’re not paddling hard underneath the water.”

“This is what mental health is. You have highs and lows,” she says. “What I have said to my daughters is that one of the things that is getting me through is that I’m old enough to know that things will get better.”

But Mrs. Obama says, “There is light at the end of the tunnel,” and says things are looking up in terms of the pandemic. And she has a lot to look forward to at the end of her tunnel. The debut of her Netflix series is premiering Tuesday, the release of a special young-reader edition of her memoir, Becoming, and construction of the Obama Presidential Center in Chicago’s South Side.

She tells PEOPLE, she envisions with relish a day when the spotlight moves on to a new generation of advocates, activists, and changemakers.