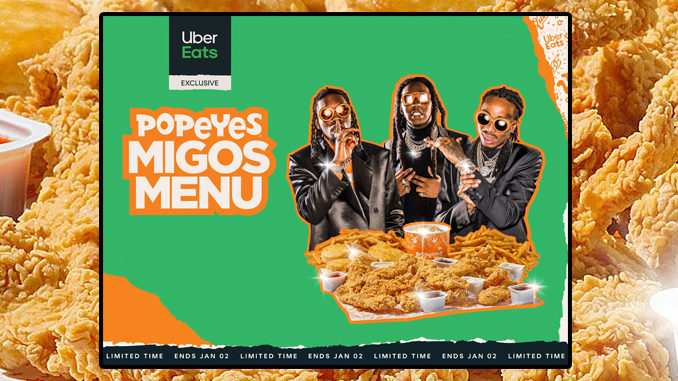 Migos is adding some Atlanta swag to the Popeye’s Louisiana Chicken menu. The “Bad and Bougie” trio has partnered with Uber Eats and Popeye’s to launch Migos menu, which features some popular items from the fast food chain. According to the Hollywood reporter the Migos’ menu is pretty affordable and it includes four different meal options. The menu will be available exclusively on Uber Eats nationwide and throughout Canada from December 6th , 2019 to January 2nd, 2020. Oh yes, it would include the must have chicken sandwich!

Migos’ love for Popeye’s is no secret. They’ve been including the food chain restaurant in their songs since 2017, they include it in their tour rider and Quavo even tried selling Popeye’s’ new viral chicken sandwich for $1,000 a piece on Instagram after Popeye’s sold out of the sandwiches. The trio is surely adding the sauce to Popeye’s this holiday season.