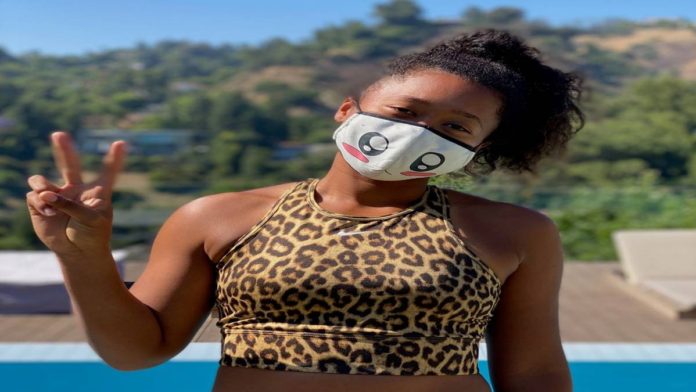 Holding the #1 spot in a major sport at the tender age of 21 may seem like the coolest thing in the world. But that’s not all that this tennis super star is working on. Naomi Osaka and her sister Mari, are showing their skills on and off the court. With their interest in fashion, they are doing their part to help the world, while also expressing their stylistic side!

“I’ve always really loved clothes,” Naomi told Vogue. “When me and Mari were younger, we used to have really long car rides to tournaments, and to pass the time, she would always draw. I just looked at her drawing and thought, ‘Oh, that looks really fun,’ so I started to copy her—which I guess is what I did in tennis as well. But that’s what started everything.”

After the global impact of the COVID-19 crisis, both Naomi and Mari decided that they wanted to use their creative instincts to make a positive impact on the world. Growing up in New York and Japan, the girls have been heavily influenced by the unique fashion of the two cities. They wanted an outlet to express themselves but also do their part to help those in need.

“I was seeing everyone in the U.S. wearing the same medical mask, and I remember in Japan even before this whole situation happened, everyone was wearing masks and they were quite fashionable,” Naomi continues. “So I wanted to release a mask that wasn’t just for protection, but could also be used as a fashion statement.”

As children, Naomi and Mari spent lots of time between Long Island, New York and Japan. Throughout that time, the pair were touched by the youth of each city. So for this venture, they decided to partner with UNICEF Japan to donate all profits to programs that support disadvantaged Japanese youth.

The mask design can be found on Naomi Osaka’s official website and was inspired by their love of cartoons. They designed cute cartoon animal masks that kids would hopefully enjoy wearing while keeping themselves safe.

Having this freedom in fashion is something the sisters really enjoy since fashion in the tennis world is usually pretty strict. We all remember Serena Williams’ infamous black catsuit she wore at the French Open in 2018, which received immediate criticism and was eventually banned. Naomi and Mari sometimes fear loosing certain sponsorships or endorsements based on their outfit choice, hair styles, tattoos etc. Women in tennis, especially women of color, are scrutinized more harshly for their decisions on the court. But hopefully we can change that. With the Osaka’s sisters dabbling into fashion, it will be interesting to see if they attempt to infiltrate the tennis system.

You can support the sisters and their charge to help manage this crisis, by purchasing a mask here.