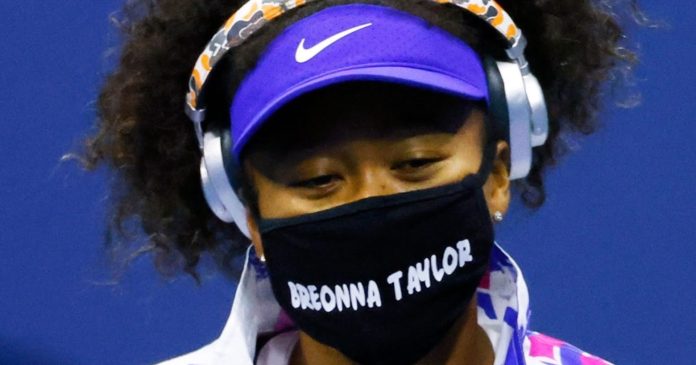 Naomi Osaka may be at the top of her tennis career but she still is using her platform to bring awareness to the more important issues.

During the opening-round of the US Open match against Misaki Doi, Osaka was seen sporting a face mask with the words “Breonna Taylor” on it. This was no surprise as many other sports stars like Lebron James and Serena Williams, continue to bring attention to her name.

The sad reality is that it has been 172 days since Breonna Taylor was killed and the police officers who murdered her still have not been arrested.

“I’m aware that tennis is watched all over the world, and maybe there is someone that doesn’t know Breonna Taylor’s story,” Osaka told reporters. “Maybe they’ll like Google it or something. For me, just spreading awareness. I feel like the more people know the story, then the more interesting or interested they’ll become in it.”

For those who don’t know her story, Taylor was killed in her home on March 13, 2020 by three undercover Louisville police officers executing a “no-knock” warrant based on speculation of drug distribution.

22-year-old Osaka said she wore this mask, “because she was most important. There are still marches going on even though people don’t really talk about it.” According to her statement, she has seven masks to represent names of those who represent the continued genocide of Black people. She continued, “It’s quite sad that seven masks isn’t enough for the amount of names, so hopefully I’ll get to the finals and you can see all of them.”

This form of protest followed the pause of NBA, MLB, MLS and WNBA games in the aftermath of Jacob Blake. Osaka continues this trend because there are “much more important matters at hand” than sports.