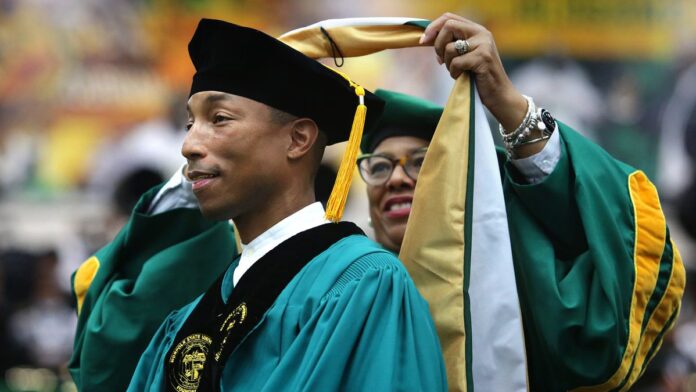 Pharrell William is a 13-time Grammy award winner, Academy Award nominee, and the recipient of ASCAP’s prestigious Golden Note Award. Even with all the success over the years, nothing matches the power of education. Pharrell is now a HBCU graduate from Norfolk state in Virgina. His experience was different from the traditional college experience but he stated “I didn’t attend Norfolk state, but I was always present.”

Last year December, Pharrell gave his first keynote speech at NSU’S 107th commencement. This was good practice for what was to come in the future. One of Pharrell’s opening statement stated, “The Magic of the HBCU is on the unified collective choice we all made to be here in the first.” During his speech he touched on a variety of topics that aimed to educate and inspire. Pharrell mentioned that the big corporations don’t understand why students go to HBCUs and gives the secret away by stating, “The secret is out, the corporations are here.” He continued by comically saying, “The smart ones anyway.” Pharrell believes that the future of the new big corporations owners are in these HBCUs and all people of color, due to big corporations looking towards people of color for what’s culturally relevant and what’s next.

Pharrell explains how nowadays people are invested in HBCU and their intellectual properties. “All this is true on a state level too, Virginia can no longer ignore its HBCUs.” he mentioned. William feels like Virginia “can no longer afford to ignore the HBCU’s .”

Pharrell goes on to talk about the young  people who are working towards solving things for the best of the communities and taking care of each other. He ends his speech by saying, “We always have been next to the money and the money, we are the money.”