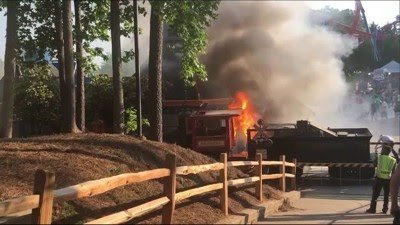 May 12th, Saturday evening a fire occurred on the Six Flags Railroad ride. Six Flags Over Georgia officials have said there was a fire on the train engine, but they do not know what caused the fire.
The officials also say two employees were taken to the hospital as a precaution but they are expected to be OK.
No park guests were on the ride when the fire started, but one guest was treated by a first aid kit. They are also expected to be OK and the fire will be continuing to investigate to find out why the fire began.

“A fire broke out on the engine of the Six Flags Railroad and was quickly contained. No guests were on board. The area was immediately evacuated. One employee was transported to the hospital for further evaluation. The safety of our employees and guests is our top priority. The train is closed for further inspection. “