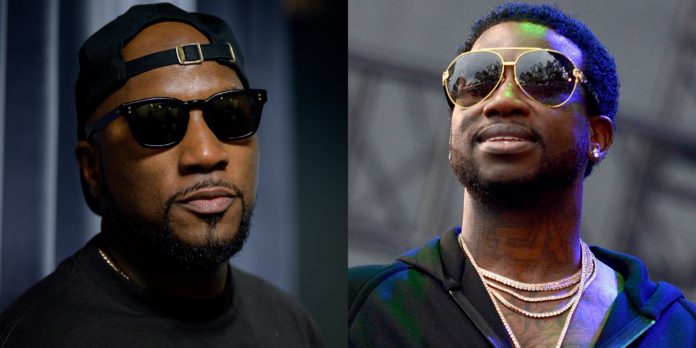 After a 15 year ongoing feud, Atlanta rap legends Gucci Mane and Jeezy came to a truce during a hits-packed battle, kicking off season 2 of Verzuz.

With 1.8 million eyes watching, Gucci and Jeezy went hit for hit and at times, blow for blow, sharing in intense verbal exchanges. The rapper’s ongoing 15-year feud has led to countless diss records, numerous fights between the two rappers’ entourage, and a murder charge, which Gucci was acquitted of in 2006.

The battle opened with Gucci playing two Jeezy diss tracks, “Round 1” and “Benchwarmer.”

Throughout the live stream, Jeezy made several attempts to remain cordial with the fellow Atlanta-based rapper. But as the show went on, it seemed Jeezy reached his breaking point.

“When I called you and extended this invite, I did so as a real man,” Jeezy said speaking directly to the fellow rapper. But Gucci continuously interrupted him.

Gucci claimed he accepted the invite only to remain “true” and “street.”

“I brought you here to show you, the world, we are the culture, what we came through and what we been through,” said Jeezy. “All these kids doing what they do because they saw us.”

The two had several different heated exchanges throughout the show. At one point, Gucci commented on Jeezy’s outfit.

“My outfit cost 10 bands, look at my opponent man,” Gucci said. “Look at him.” He continues emphasizing the difference in their styles.

Although they two battled with words the entire night, Gucci thanked Jeezy for inviting him. “I appreciate you for extending the olive branch, I respect that,” Gucci said.

The battle ended with the two rappers coming to peace, performing the song that ignited their feud 15 years ago, the 2005 hit “So Icy.”

Before the livestream ended, both artists announced their current or upcoming projects.

Thursday’s Instagram battle is an ongoing series produced by Swizz Beatz and Timbaland. Verzuz, which originally started as a way to entertain fans during quarantine has since evolved into a cultural phenomenon.

Other musical icons who have battled in the series include Fabolous vs. Jadakiss, Alicia Keys vs. John Legend, Erykah Badu, and Jill Scott.