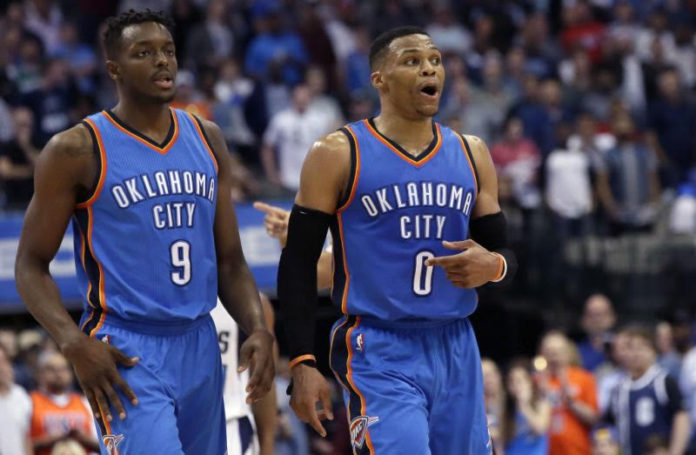 On Monday night, Russell Westbrook of the Oklahoma City Thunder was caught on camera having a verbal dispute with a Utah fan and his wife during the Oklahoma City-Utah Jazz Basketball Game.

Russell Westbrook was seen threatening the Jazz fan by saying “I’ll f*ck you up. You and your wife.”

When asked about the altercation, Westbrook reported that the fan told him to “get down on your knees like your used to,” which aggravated and provoked a response from the NBA player. He also felt like the fans comment was quote, “completely disrespectful and racial, to me I think it’s racial. I think it’s just completely inappropriate in the sense of there’s no protection for the players.”

Jeremiah Jenson interviewed the fan, Shane Keizer, after the game about Mr. Westbrook’s actions. Mr. Keizer response towards the whole issue was that he told Westbrook to simply “sit down and ice your knees bro” and Westbrook responded saying “that’s heat, that’s heat bro”. Keizer claims that the situation escalated from there.

Fans on Twitter immediately took a response to bash Mr. Westbrook by saying “he should ignore it”. Others searched for information on Mr. Keizer. Mr. Keizer deleted his previous tweets on twitter but fans sought to find the truth. Twitter found tweets from 2018 of Mr. Keizer saying “Russell Westbrook needs to go back to where he came from!! #MAGA”. Another Tweet says:

According to For The Win USA Today, “It took people less than 12 hours to not only figure out who the fan was, but that this fan has a social media presence that contains racist, violent and xenophobic language.”

Mr. Keizer tweeted at 2:05am this morning that “My official statement regarding the interaction with Russell Westbrook tonight in Salt Lake City will be posted via my attorney, shortly. #NBATwitter  #UtahJazz.”

Tune in for more updates here at JaGurlTV.