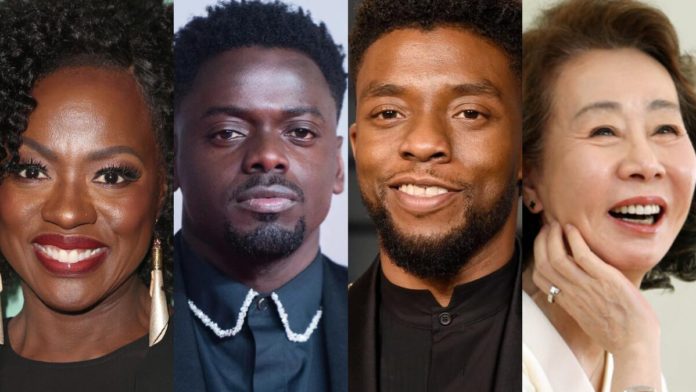 Sunday night, the 27th annual Screen Actors Guild (SAG) Awards made history when all four of the top big-screen acting awards went to people of color.

Following the trend of many award shows during the pandemic, the one-hour pre-tapped show featured 13 awards given out via video chat.

Davis won the Outstanding Performance by a Female Actor in a Leading Role for her role in “Ma Rainey’s Black Bottom.”

What can I say? I’m grateful. Thank you @SAGawards…and….forgot to thank the awesome Ted Sarandos and Scott Stuber at @Netflix…and @LouisVuitton for the incredible dress. Thank you!! Humbled. 💛🙏🏿 https://t.co/cSSft9IUQ1

During her acceptance speech, the actress thanked playwright August Wilson for “leaving a legacy for actors of color that we can relish for the rest of our lives.”

Boseman also won the award of Outstanding Performance by Male Actor in a Leading Role his role in “Ma Rainey’s Black Bottom.” His wife, Taylor Simone Ledward, accepted his award.

Kaluuya won the Outstanding Performance by a Male Actor in a Supporting Role for his portrayal of Black Panther Leader Fred Hampton in “Judas and the Black Messiah.” During his acceptance speech, Kaluuya dedicated his win to former co-star Boseman.

“This one is for Chadwick Boseman, and this one’s for Chairman Fred Hampton. Thank you so much,” he says.

Yuh-Jung won the award for Outstanding Performance by a Female Actor in a Supporting Role for her performance in “Minari.” She has become the first Korean ever to win that category.