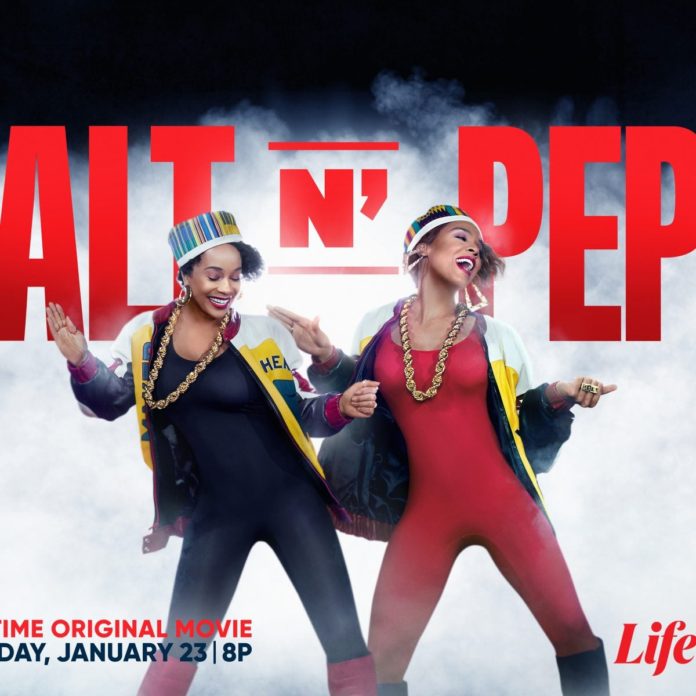 The film follows the story of Queensborough Community College students, James (played by G.G. Townson) and Denton (played by Laila Odom) as they rise to fame in the world of rap following the release of their hit single recorded in a New York City public bathroom.

In an interview with Good Morning America, James describes the film as a “story of friendship, a business relationship, a lot of challenges that we have overcome in our career.”

Actress Laila Odom (who plays Pepa) also explains friendship as the theme of the film.

“Overall it’s about friendship,” says Odom. “At the end of the day 35 years after they meet their still friends, they love each other, and they’re still touring and performing. I think that’s a key part to remember, their friends. Through the business it gets ugly and it gets rough, they come back together.”

The secret to their long-time friendship? James claims that it’s their love for their baby “Salt-N-Pepa”

Empowered by the trials rap duo overcame, Towson details what she hopes women learn from the movie.

“One lesson I’d like women to take from this is to stand in your integrity and do what serves you, don’t do what other people want you to do,” Towson says. “If something is not serving you do the work that you need to do to make it right, you can’t pour into someone else’s if yours is empty.”

“Salt-N-Pepa” premieres on Sat. January 23rd at 8pm on Lifetime.

Following the premiere will be a special feature with both rap icons disgusting the film hosted Loni Love.