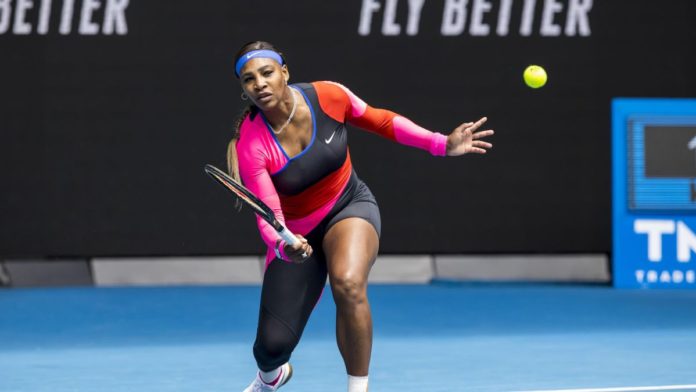 The Grand Slam Champion continues to serve looks on and off the court. On the first day of the tournament, Williams won against Germany’s Laura Siegemund. Williams beat Siegemund 6-1. In a postgame interview, Williams explained the sentimental meaning behind her outfit.

“I was inspired by Flo-Jo, who was a wonderful track athlete, amazing athlete when I was growing up,” Williams tells ESPN. “Watching her fashion, just always changing. Her outfits were always amazing.”

“This year we thought of what can we do to keep elevating the Serena Williams on the court,” she adds. “The Nike team actually thought of this design of inspiration from Flo-Jo. I was like, ‘Oh, my god, this is so brilliant. That’s where we started obviously we made some changed and tweaks to it. It became this.”

Williams opted for a biker short-length on her asymmetric catsuit in comparison to Flo-Jo’s bikini cut.

Florence “Flo-Jo” Griffith competition-style included bold colors, prints, nails, and even lipstick. The cultural icon won three gold medals and set the record in the 100-meter sprint during the 1988 Olympics.

She retired from running in 1989 and passed the following decade.

Beyonce also paid homage to the cultural icon by dressing like the runner for Halloween in 2018.