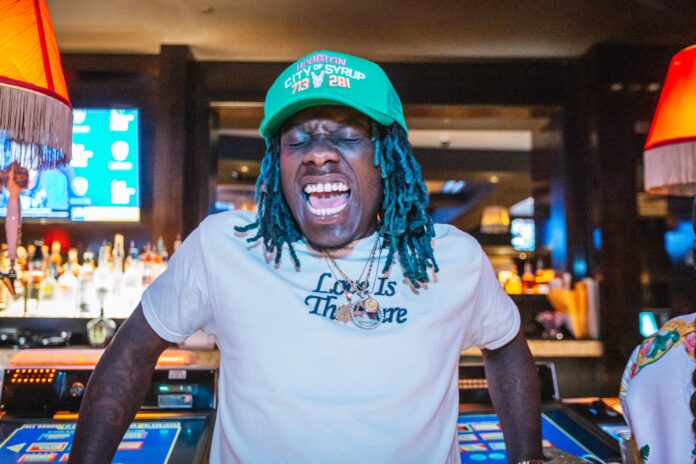 JaGurl TV caught up with Texas own Squalla. Squalla is known for his stellar rapping that has taken over the southern Culture of his hometown in Texas. Squalla has been putting on a show everytime he hits the stage, catching the audiences with his stage presents. His debuted album Anxiety was released in 2016 and he has been on fire since. He has been featured in Spotify’s Top 100 list in 2021 for records like “Jet Lag”, “Go” , “Floating”, and “Hit Different” to name a few. Squalla has also been building up his roster working with legendary producers such as Zaytoven ,Honorable C Note and Mike Zombie.

Squalla mentioned to us that he has been working on this upcoming album entitled Sedatives dropping this summer for approximately 3 years, “This album is pretty much a summary of my time since I moved to Cali from Huston”. When asked what was your vibe coming into creating this new album he stated, ”just everything has been going on for the last couple of years like relationship’s dealing with the music industry,” he continued, “I don’t like my album to just have one sound, I like my album to be like a journey”. Spualla mentioned “i just want to feel like i’m taking you through portal’s.”

Squalla told us the reason behind naming his project Sedatives “This is a follow-up for my first album, Anxiety.” He goes on to explain, “it’s like when you get diagnosed with anxiety they give you the sedatives to kinda fix that, so it’s kinda like that.” Squalla also mentions he not only wants his album to sound like a journey, but also his career “every album will be a journey with in themselves, but the albums all together will be apart of the bigger journey.” Which will be his career. “This is just the next stop, from the first one that pretty much changed my life.”

Squalla has worked with some legends in the music industr , and he has a lot more as he wants to work with Rick Ross, Kanye West and legendary producers like Pharrell just to name a few. He also mentioned he wanted to work with Beyonce. We asked him what Beyonce and him would create, “I feel like it would be something ratchet, you know she’s from Houston, she got that” he said smiling.

If Squalla was not rapping right now would he be playing for the NBA? Squalla laughed “I stopped that Pursing a long time ago.” He felt like he was too short to be a basketball player. Squalla goes on to say, “basketball has done so much for being outside of just playing. Basketball and rap is like, they go hand and hand it’s like every rapper wants to play basketball and every basketball player wants to rap.”

If this is your first time ever coming across Squalla , he recommends listening to his single “Floating“ out now and also a music video out on Youtube. Stay tuned in this summer for Sedatives , Squalla’s new album.