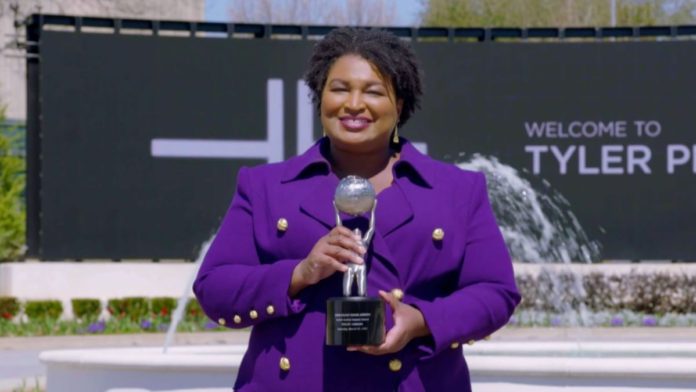 This year during the 52nd annual NAACP Image Awards politician, lawyer, and voting rights activist Stacey Abrams was honored with an award from a very important figure.

Stacey Abrams received the NAACP Social Justice Impact Award from the one and only former lady Michelle Obama.

During the ceremony, Obama expressed in a speech the impact Stacey Abrams has had on the community which ultimately led to her achievement of this award. “She put even more of her energy into this beautiful country of ours,” said Obama. “And she brought a whole lot of people along with her. Thankfully, she’s just getting started, and I know she’ll make a difference in the years ahead–a beacon of hope, a role model for a younger generation.”

Mrs. Obama also acknowledged how impressed she was by Abrams’ ability to “double down” after losing her bid for the gubernatorial race in 2018.

Abrams is the founder of Fair Fight which is an organization founded in 2018 by Stacey Abrams herself, to address voter suppression, especially in the states of Georgia and Texas.

The politician has done a phenomenal job applying this to her community and her efforts in the voting world have not gone unnoticed. Because of her, there were over 800,000 new registered voters across the country during last year’s Presidential election. Abram’s work also led to the election of the country’s first Black and Asian American woman Vice President Kamala Harris, and Georgia’s first Black pastor representing the state in the U.S. Senate Rev. Rafael Warnock.

During Abrams speech she reflects on her upbringing and how that ultimately played a role in her fight for efforts to expose any forces that get in the way of Black citizens’ ability to exercise our rights to vote.

“I am grateful for the NAACP century of dedication to racial justice, democracy and equality. I was raised by my parents, the Reverend Robert and Carolyn Abrams, to see the challenges in our world as opportunities to act. They taught me and my five siblings that having nothing was not an excuse for doing that. Instead, they showed us by word and deed to use our face as a shield to protect the defenseless to use our voices to call out injustice, and to use our education and our time to solve the problems that others turn away from,” said Abrams in her acceptance speech.

“I share this award with all those who champion progress, equity, and the truth of who we are and who we must become as a nation. One that defends and expands democracy, that protects justice and the current promise…one that delivers equality and equity, knowing that both are required.”

Congratulations to Stacey Abrams on this amazing achievement!