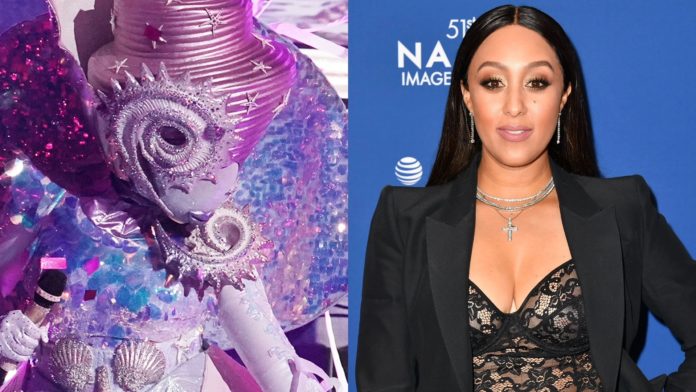 Actress Tamera Mowry-Housely has been unveiled as the Seashell on The Masked Singer. She sat down with People to discuss her fear about the Masker Singer and wanting to return to Disney.

Although the judges didn’t guess Mowry-Housely’s as Seashell until her final appearance on the show, her twin sister Tia Mowry-Hardrict had suspicions all along.

“The moment I performed the first time, my phone was blowing up from my family,” the actress tells People. “My brother, Tahj, and my sister, Tia, were texting back and forth. And they said, “We know this is you, Tamera. That shoulder and knee pop, it gives it away.”

The Masked Singer is a secret singing competition. Celebrities perform songs wearing elaborate costumes and masks while facing off against each other. Throughout the series, the mischievous rooster has been giving clues to the audience and judges about the celebrity’s identity behind the costumes. If the judges guess the celebrity identity, the star is eliminated.

For the former Disney Channel star, returning to the stage for the Masked Singer was a dream come true.

“It always been a dream of mine to sing again,” she says. “I started my Hollywood career in a theater group, actually. I was acting and singing at the same time. It was called Voices, and I was 14. And at the same time, I was doing a pilot called Sister, Sister. So I had to focus more on acting, but I always wondered what it would have been if I went that route.”

Her own curiosity drove her to the stage again; fear began to mount. As the mother of two began to doubt herself.

“I cried multiple times because there were moments I wanted to run the opposite way,” the actress says. “I hadn’t performed in over 20 years. And you are brought into this whirlwind. It was me up against the girl that was afraid to sing, afraid of what people would say, afraid of the critiques, afraid of even succeeding.”

“For me, it was about facing the fear, not hiding anymore,” she adds. “Tapping into something that I have loved to do for years and just going for it.”

As the former co-host of the Real ventures back into her acting career, Mowry-Housley hopes to return to Disney Channel along with dropping an album possibly.

“I want to do a gospel album, a musical, a Disney Film,” says Mowry-Housley. “That would be fun. It was interesting because a lot of the judges, they literally said almost every Disney princess singer out there- Idina Menzel. Anika Noni Rose, Kristen Bell.”

Although our favorite dazzling Seashell will no longer be on the show, be sure to watch the remaining contestants of The Masked Singer on Wednesdays on Fox at 8 p.m, EST.